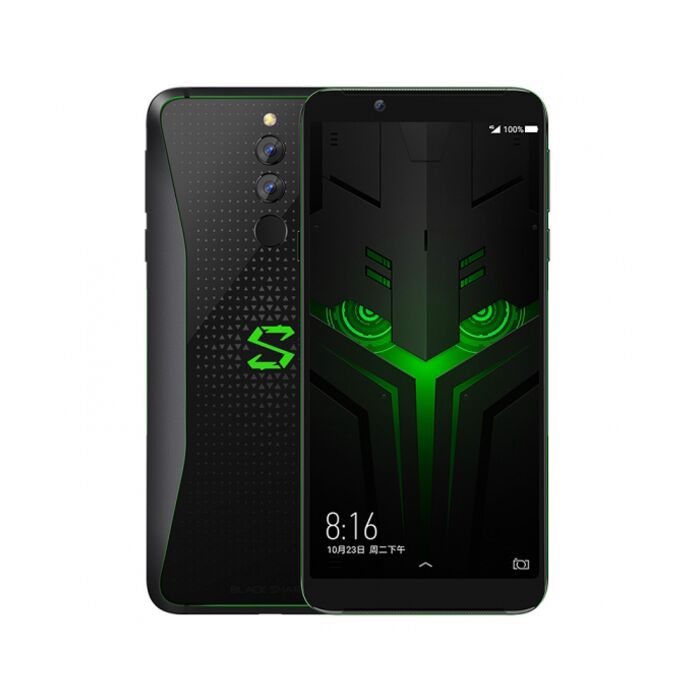 The Black Shark Helo Phone is equipped with the latest Qualcomm Snapdragon 845 with 6GB/8GB/10GB of RAM, and best-in-class thermal design. Capture the perfect shot with 12MP+20MP dual cameras featuring f1.75 wide angle lens and 2x telephoto lens. Backed by a powerful 4000mAh battery, you have the power to last all day. The Helo boasts front-facing stereo speakers, RGB LED-illuminated back logo and side strips, vapor chamber for cooling and HDR10-compliant screen. A dedicated mobile chip by Pixelworks helps converting SDR content to HDR.

The Helo has two liquid cooling pipes with a combined area of 10000mm². The cooling pipes can reduce the CPU’s temperature by up to 12°C and increases thermal efficiency by up to 20 times.

The Black Shark Helo has a 6.01-inch 18:9 display. It is not just a tad bigger than the original but it is an AMOLED screen and not LCD. It also has a dedicated image processing chip that works with the AMOLED display for superior HDR quality. It also has support for DCI-P3 and SRGB for a wider color gamut.

A large area of the back is covered in glass with the pattern from the original underneath. The area covered in glass is where you have the dual cameras which are now vertically arranged in a straight line with the LED flash and fingerprint scanner. There is also the Black Shark logo which now glows thanks to the RGB LED underneath. That isn't the only RGB LED on the device. There is one on each side of the frame that can change between 16.8 million colors with different effects based on the games you are playing.

The Black Shark Helo has dual rear AI cameras, a 12MP primary sensor and a 20MP secondary sensor, both with f/1.75 aperture and LED flash. The cameras can recognize up to 206 different scenes and take bokeh images. The front camera is a 20MP sensor with f/2.2 aperture that can also take portrait mode selfies. Sitting below the rear cameras is a fingerprint scanner.

The Helo has front-facing stereo speakers. The audio should be significantly better now, thanks to the larger cut-out for the top speaker (symmetrical with the bottom speaker). There is a Smart PA amplifier and Black Shark’s own Biso audio technology. It also has 3 microphones for clear calls during gaming. Black Shark says the Helo has improved signal reception thanks to its X+1 antennas.

Gamer Studio is a dedicated app where users can tweak CPU settings, notifications, sounds, and more. There is also Shark Time, an AI-based feature that automatically records highlights while you are playing games and allows you to share them. The Shark Key is also still there for one-key push performance boost and DND activation.

The Helo is equipped with a 4,000mAh battery—one of the largest capacities found in any smartphone—the Xiaomi Black Shark Helo Phone provides the absolute freedom to watch, listen and play as much as you want without ever being caught with a red battery bar. 9V/2A Quick Charge 3.0..

Support Rear fingerprint to unlock your phone faster than before.