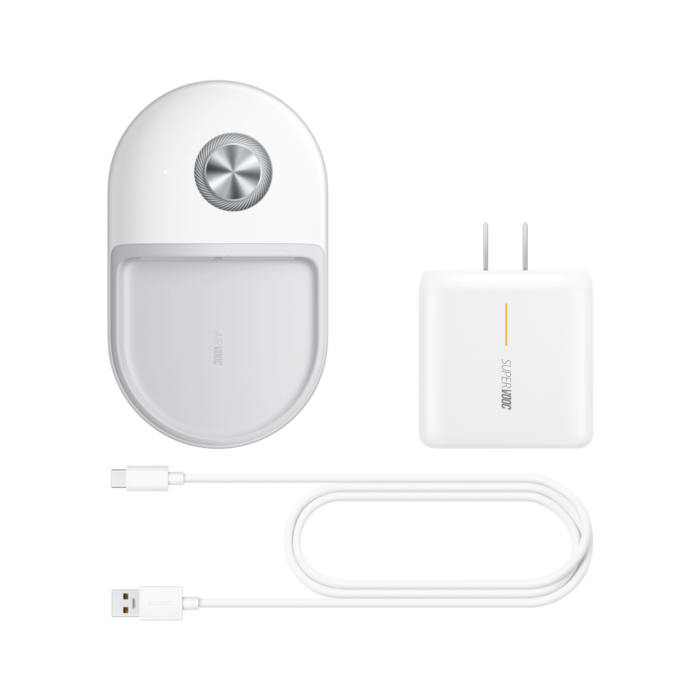 The 40W AirVOOC Charger has a mat-design which means the phone lay horizontally on it to charge. The fan is exposed translucently, presenting a CD pattern design, full of sense of technology.

OPPO 40W AirVOOC Wireless Charger is equipped with OPPO wireless flash charging technology, the power is up to 40W, the charger can fully charge the OPPO Ace 2 from empty to full in just 56 minutes.

Self-developed butterfly wing air cooling technology, the fan blades are designed to be thinner and denser, with the side double air outlets and streamlined air duct design, which brings a strong heat dissipation effect and the system heat dissipation performance is improved by 40%. The fan has a noise level of less than 22dBA, helps to bring down the temperature to under 39°C when charging the device.

OPPO 40W AirVOOC Wireless Charger supports supports Qi wireless charging and can be used to charge Qi-compatible phones at up to 10W.

With high voltage input and fast charging mode, provide overcharge, short circuit, over current and over discharge protections. OPPO 40W AirVOOC Wireless Charger has passed the safety certification of the authoritative organization TÜV Rheinland, which is safe and reliable. It is also able to detect foreign objects to ensure maximum security.

More Information
Related Products
Write Your Own Review
To Top