Xiaomi curved display hands on Review: 34-inch fish screen is it worth to buy?

After 2 days of use, I finally adapted and even began to enjoy this curved super widescreen.

Despite the early preparations, it was much longer than expected. 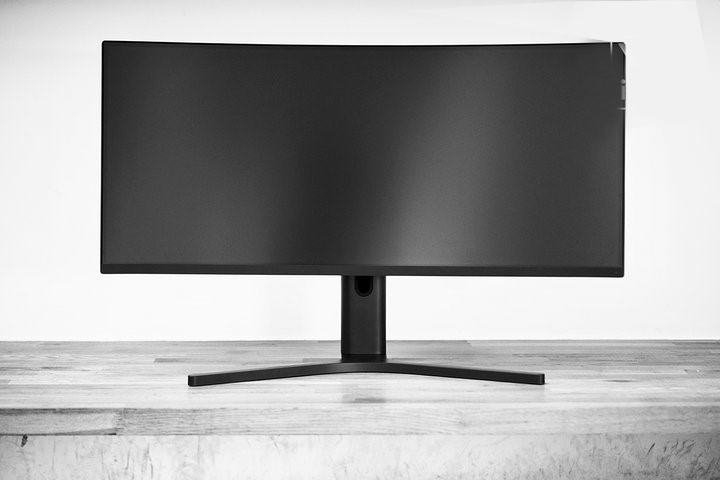 This is the curved display that Xiaomi released in October. Unlike the mainstream 4:3, 16:9 ratio, 21:9 is a bit of a "surprise" for people who have just come into contact, a feeling that is even stronger when I use it as an extended screen for my notebook. The 34-inch size is more than twice the size of a laptop screen, and the curved effect also gives a slight sense of pressure that comes with the word.

However, in the live use of split screens, seat after moving back to accept much easier, office efficiency has also been greatly improved. 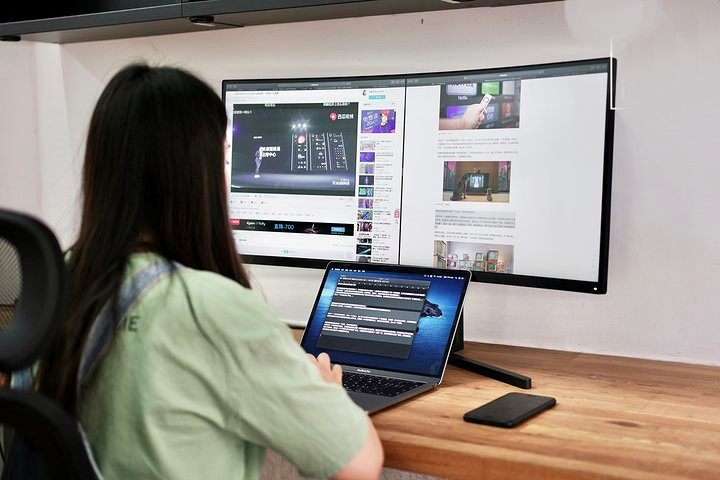 Before officially opening the Xiaomi curved display, it is better to open the box to understand the accessories.

Remove the display console, the box is equipped with a Y-base, a stand, a power cord, and a DP signal line, several stud screws. 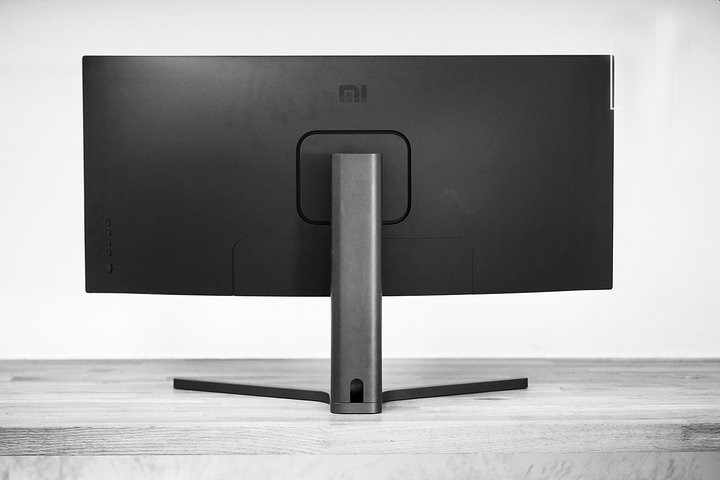 The assembly is easy, the bracket is connected by a 100mm x 100mm VESA interface snap, supporting up and down lift, left and right rotation and forward tilt back, the only force required throughout the process is hand-screwing the base screws. Since there is a VESA interface, it can be quickly disassembled later if used with a wall mount or rocker arm. 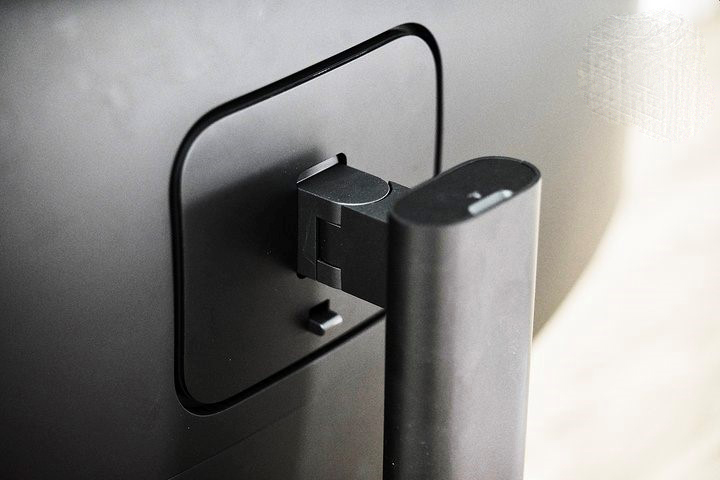 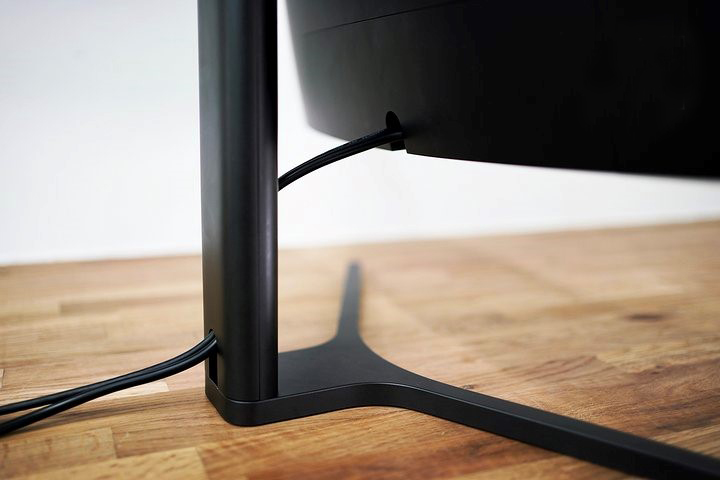 34-inch, 1500R curvature, left and right bezels of only 2mm, xiaomi curved displays provide a large enough horizontal field of view. Personally, i think the distance to the screen is around 0.8m and the best way to see the contents of the screen without having to twist your neck at a large angle. 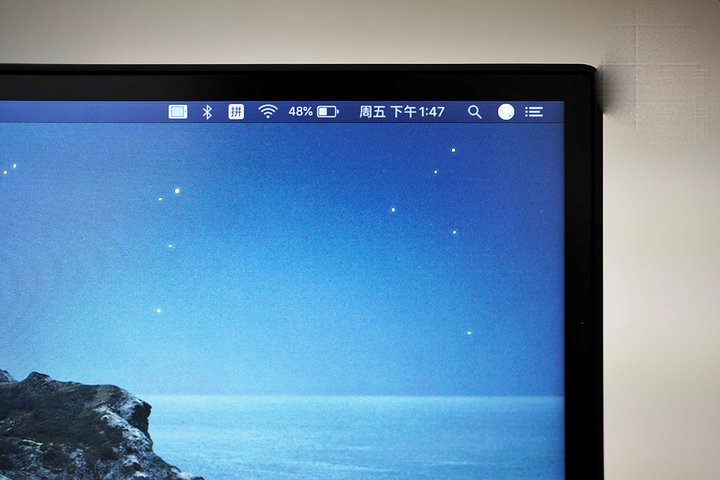 As mentioned earlier, for users who have not been exposed to a fish screen, the initial use will be a little uncomfortable, after the habit of this in adaptation can be converted into an immersion, there is a real integration from the outside into the screen of the Internet world illusion.

When you feel that the screen is too wide, when the single window is not enough white, open the split screen to divide a monitor into multiple areas, the whole person is comfortable. For example, I use the left half screen bilibili to see the press conference, the right half screen to find information, notebook screen used to dock colleagues and code words, to a large extent to save the switch window and distraction time. 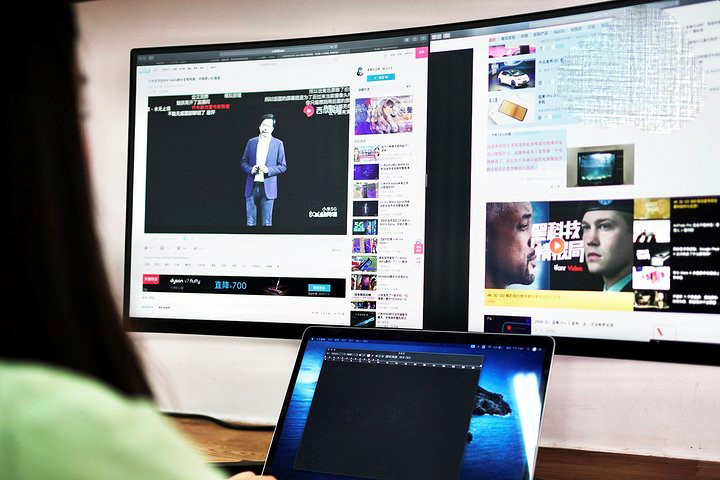 Usually we buy a monitor and, most importantly, a clear use, which will determine the choice of subsequent parameters:

In size, 16:9 means safe, while 21:9 for Xiaomi Curved displays is a better choice. 21:9 is becoming popular because more and more people are not satisfied with using only one 4:3 or 16:9 extension screen, and 21:9 is equivalent to two screens together.

In terms of work, a wider screen will support more task handling and improve office efficiency.

In terms of video and video, domestic variety, TV dramas or 16:9 ratio, the use of xiaomi curved display around the black edge, and most movies, especially in the United States, use 2.35:1 frame, using 21:9 monitor play can fill the entire picture.

As it is the positioning in the game entertainment of the electric competition screen, Xiaomi curved display in color, resolution, response time and several aspects of the focus.

The display features a VA widescreen panel, which has the advantages of brilliant colors, the advantages of viewing angle and contrast ingcity, the ability to display the dark screen more clearly, the disadvantages are equally obvious, the color angle of view is relatively poor, easy to whiten when viewed at large angles.

From the officially advertised data, the brightness of 300cd/m2 may be only medium level, but the resolution is 3440 x 1440 (can be counted as 2K plus), the screen contrast is 3000:1, and the gtG response time of up to 4ms, the high refresh rate of 144Hz, and AMD-Free Sync technology, these parameters are sufficient to ensure smooth and tear-free screen time. 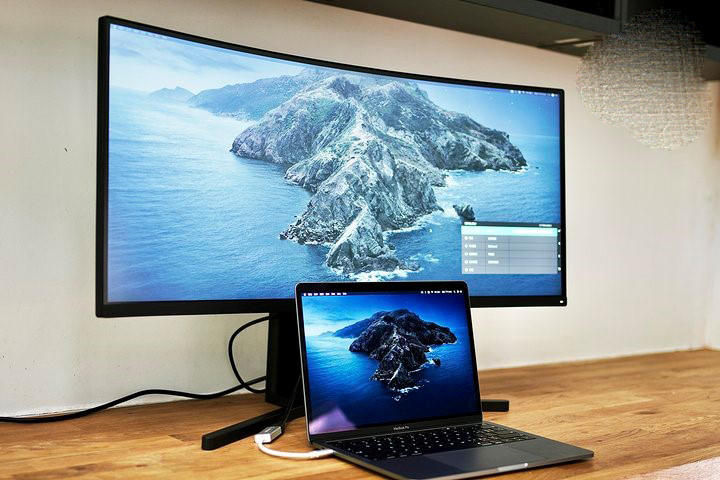 Listening to our presentation or looking at the data may still be difficult to visualize, and we also used the Spyder X Elite colormeter to do a set of tests on the Xiaomi curved display.

As the name implies, the higher the brightness of the display, the more able it can be used in bright environments, and the higher the contrast, the more intense the highlight edifice will be.

In this session, we measured that the Xiaomi curved display can reach 330 cd/m2, exceeding the official publicity of 300cd/m2, easily meet the needs of indoor use, daily use is set at 20% to 50% is a more comfortable value.

Perhaps because the Spyder X Elite optical engine is more accurate, the contrast of Xiaomi curved displays is around 700:1, while users on the network have used Spyder 5 Elite to run out of 1700:1 (under 50% brightness setting), measuring the data and the highest contrast in the promotion of 3000:1 (TYP) and a gap.

International regulations to the annual average noon sun 6500K as the base white point of the standard color temperature, and Xiaomi curved display under different brightness of the white dot sits exactly around 6500K, color temperature is no problem. 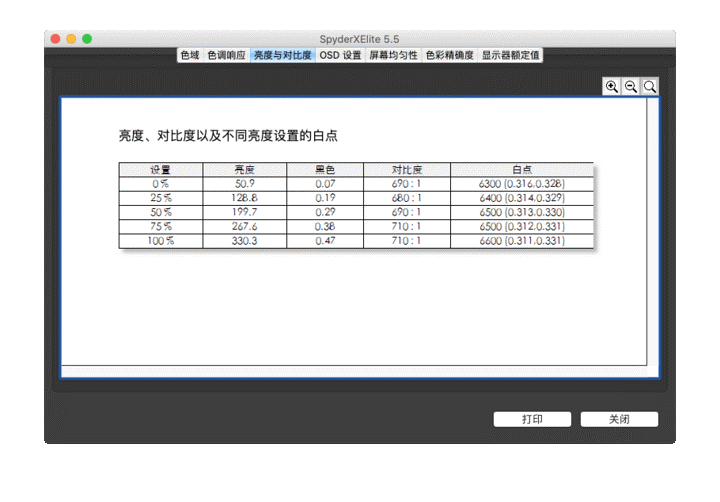 For a monitor, there are three criteria that best describe the screen color gamut, arranged in the color range covered by: sRGB ( Adobe RGB , P3).

Test results show that in addition to 100% sRGB, Xiaomi Curved Displays cover 84% Adobe RGB and 89% P3 color gamuts, which are upper-middle-level and have a bright enough picture to be more than enough for most regular users.

Again, this display is not suitable for color processing related workers because 100% Adobe RGB and P3 color gamuts are not supported. 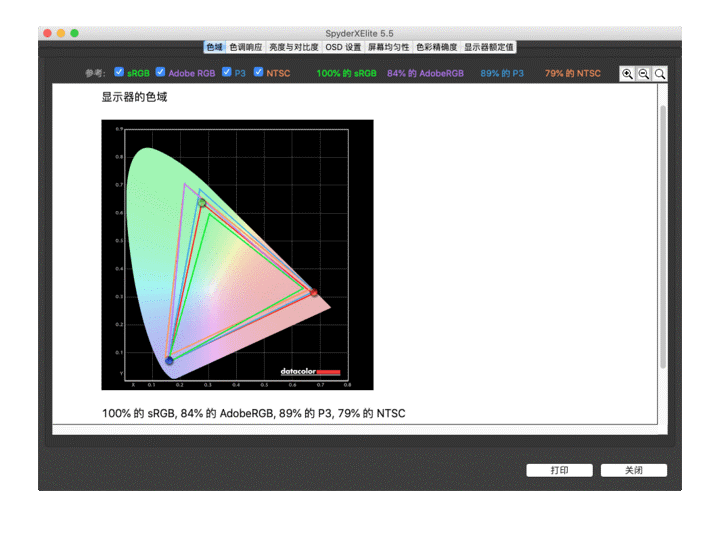 Color accuracy is also important to ensure that colors are rich.

Usually we use the e standard to evaluate the color accuracy, the smaller the number represents the smaller the deviation, the stronger the color reproduction ability. In the 48-color test, Xiaomi Curved Display Color Pass Maximum 4.60, Minimum 0.26, Average 0.87, Blue-green system slightly oversaturated, most of the color E values are below 1, the score passed. 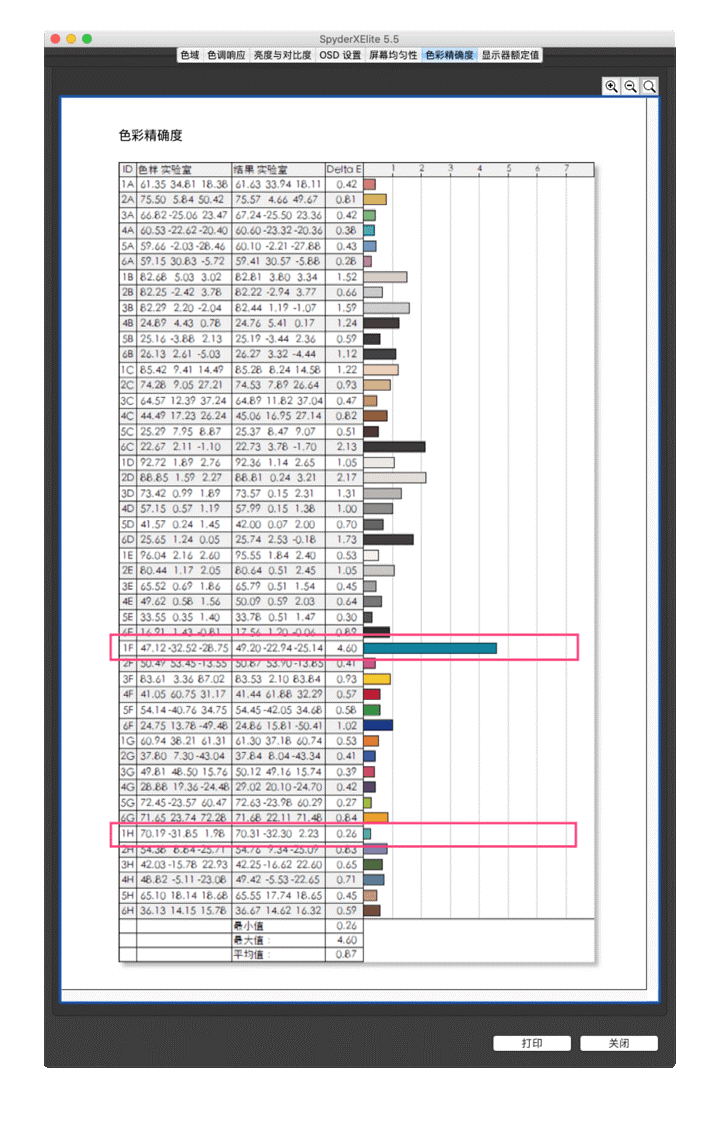 Screen uniformity consists of two parts, one is color uniformity, the other is brightness uniformity.

In the chroma uniformity test, the yellow block represents the difference between the color temperature and standard values of each block of the screen, and the larger the color, the darker the color. The left block of Xiaomi Curved Display is a maximum of 3.1, and the human eye can barely distinguish the difference in color. 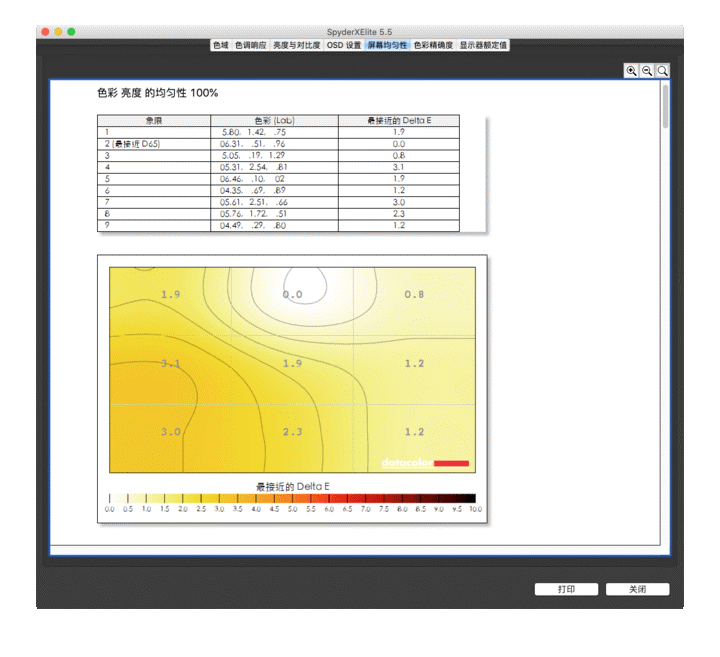 Large-size curved screen for light leakage control is difficult, Xiaomi curved display screen brightness and D65 standard value of the maximum difference of 10%, in fact, has been better than some professional-grade displays, this screen uniformity is within a reasonable range. 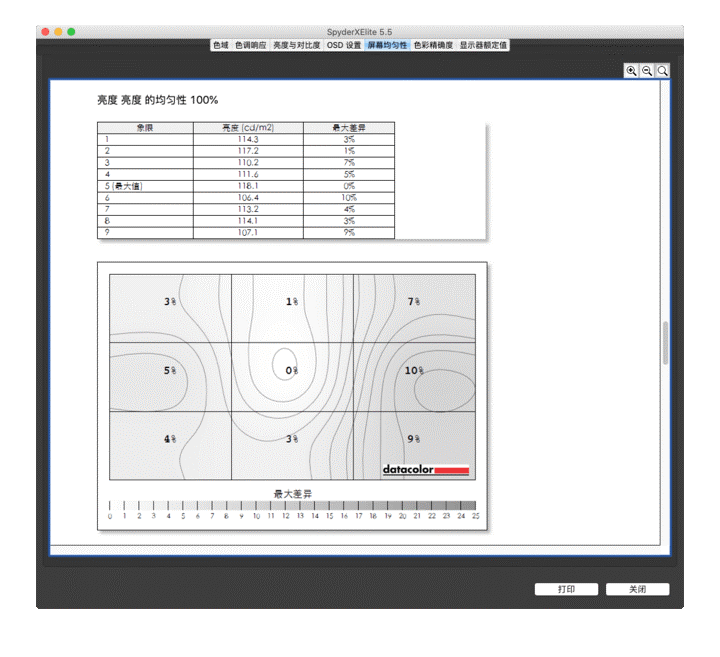 Spyder X Elite has a high rating of 4.5 (out of 5) for Xiaomi Curved Display overall rating. 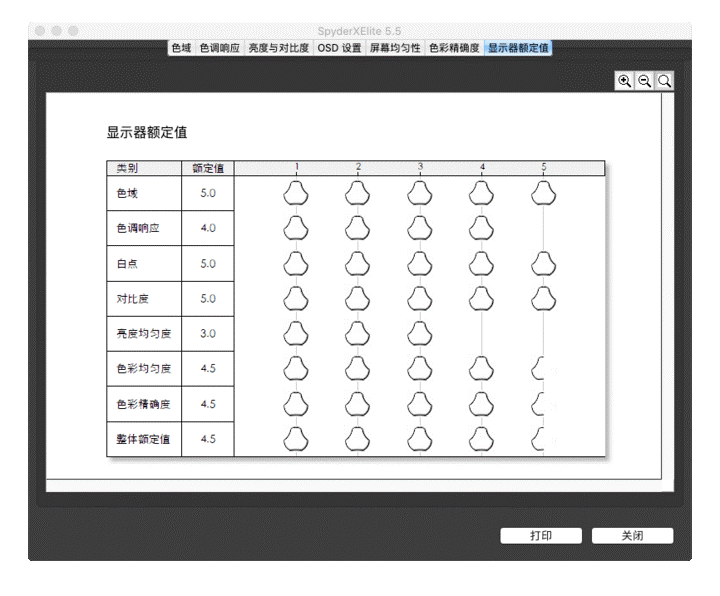 Get to know the configuration and finally get back to the price.

Xiaomi curved display costs $499, once again with strength to prove that the "price butcher" is not a false name.

Previously, the price was little bit higher and ultra-widescreen screening conditions of the display and there is no well-known brands, consumers are difficult to do comparative choice, and Xiaomi into the market, achieved the lowest price with the configuration of products, the highest price of products. 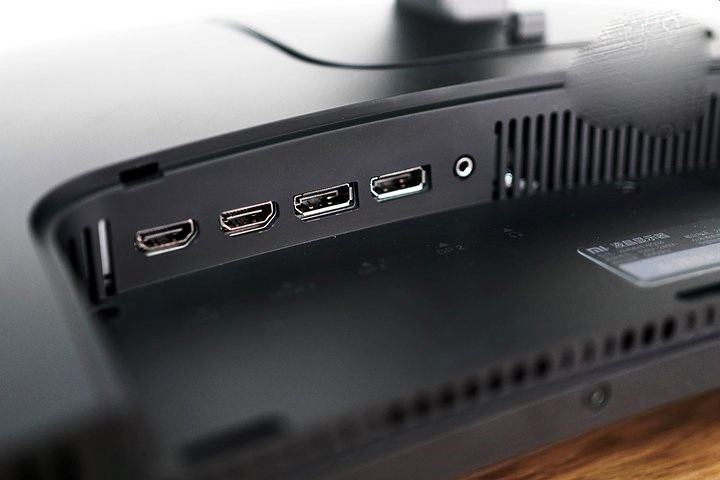 In summary, Xiaomi Curved Display has many advantages:

There are some things that can be improved if you have to pick a sting. Of course, considering the price point is not a hard hit: 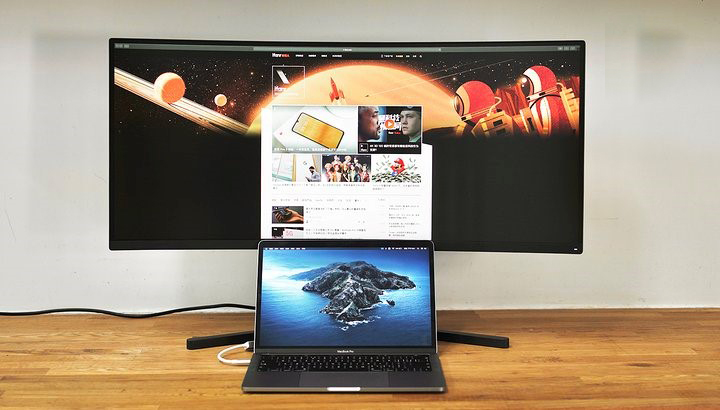 If you're an immersive movie and video entertainment player, or a frequently open-windowed office worker, Xiaomi Curved Displays are a very cost-effective option for you with a limited budget.