How much do people like two-in-one products? In my home alone, there is already a washing machine, integrated with an empty new fan and even a doorbell with monitoring function.

But from my experience, the two-in-one product is not as good as everyone thinks, nor does it achieve the effect of 1-plus-plus-two. Washing machines often adjust the longest drying time also can not dry clothes, the new fan will take a long time to pull the home when the smell of the odor empty.

Not to mention that doorbell, it's definitely the smart appliance I've ever bought the most. Because the monitoring function is power-consuming, I basically have three days to remove it to charge it overnight.

There is also a very popular two-in-one product on the market today, which is the sweep-and-drag robot. Previously, the sweeping robot slotted with the integrated drag-and-drop function would only appear on high-end products, but now many low- and medium-priced products are also integrated. But most of the reviews are the same as I said above, and 1-1 doesn't have the effect of 2.

Today, Stone Technologies unveiled the new Stone Sweeping Robot T7 (hereafter referred to as Stone T7). Compared to the previous T6, this update focuses on the drag-and-drop function. So, will this T7 satisfy my desire to spend a penny on two jobs? 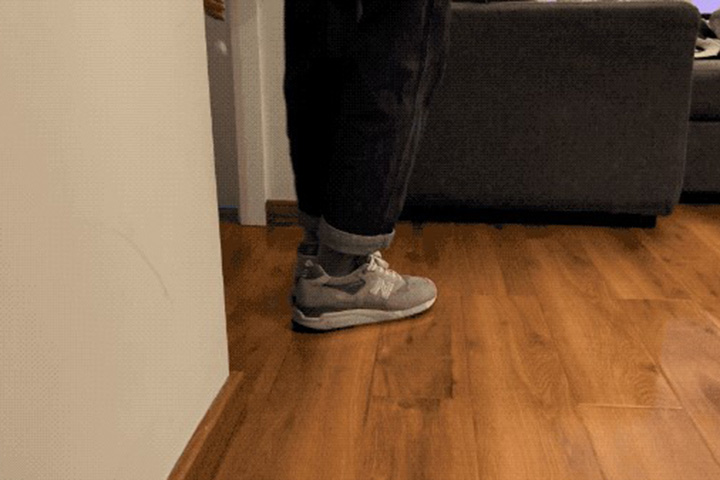 Consistently Simple Style, Come and Go With a Small Body

Like the Dodos and their eco-chain smart appliances, the design of the Stone T7 is still designed to be simplicity. The all-white body with a little red embellishment will not be too simple, but also well integrated into most people's furniture. Of course, if you like more extruded designs, you can also choose cloud stone gold color. 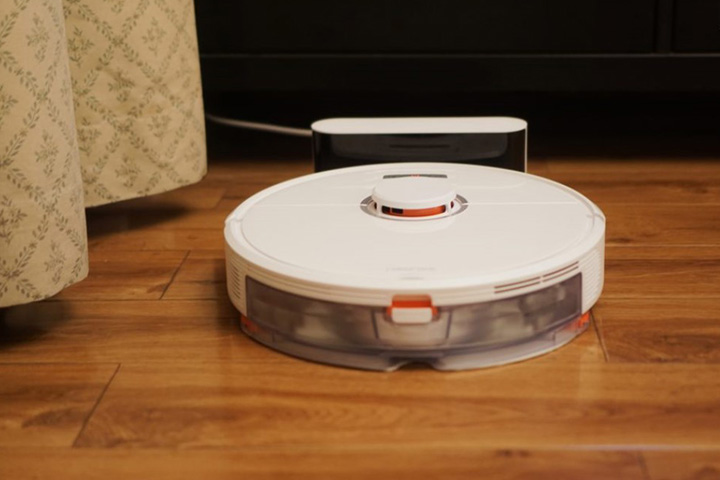 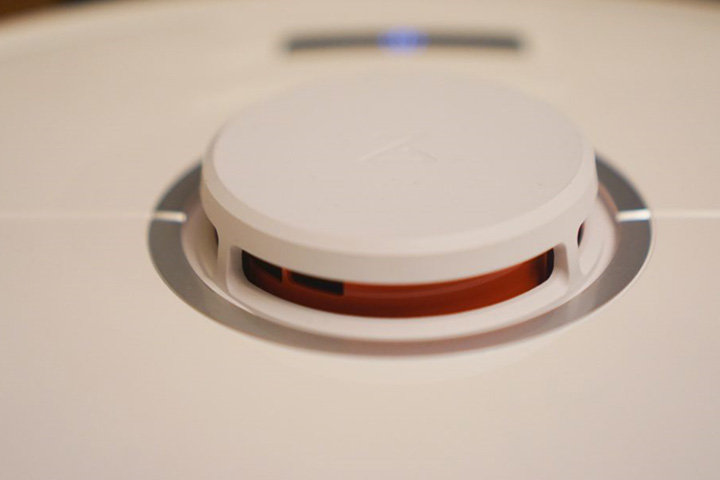 For sweeping robots, the three-ring is more important than the face value, especially the height. 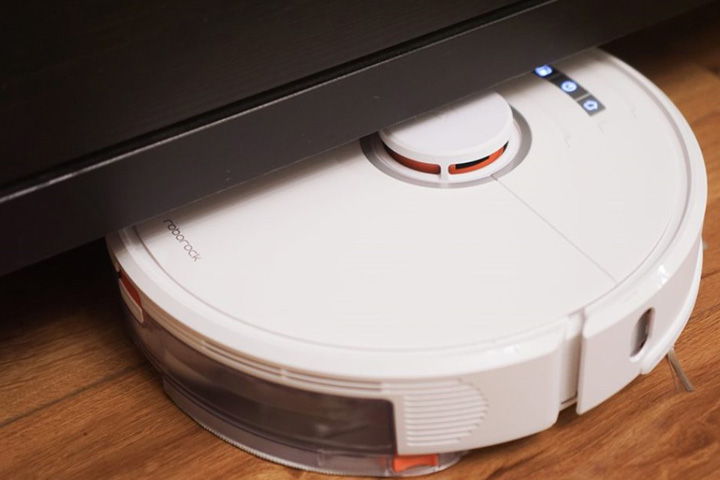 The stone T7 has a height (thickness) of 96.5mm and is easy to access for most of the clean dead corners of the TV cabinet, sofa, etc. that are not particularly short. 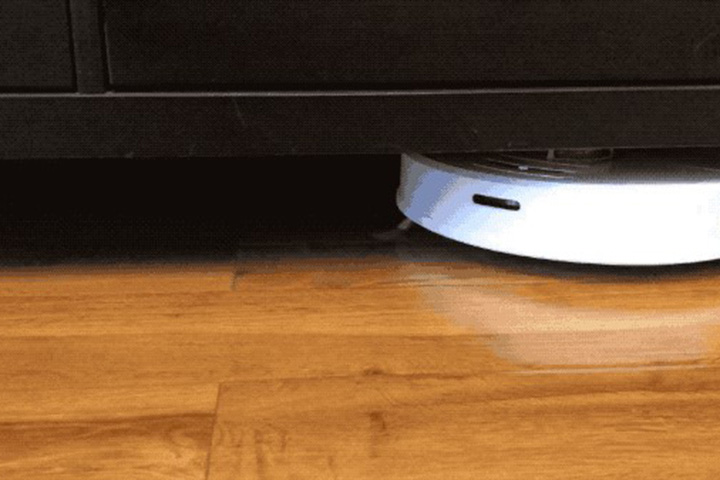 In addition, some of the small obstacles in the home, the stone T7 can easily cross. 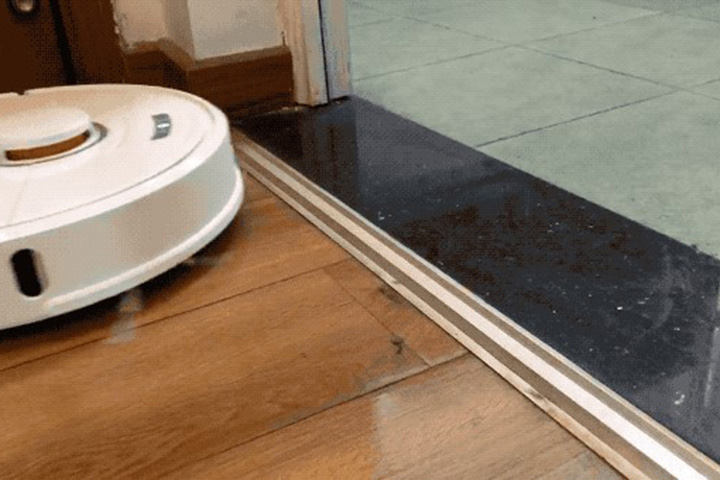 As for the charging base, the size compared to the similar products on the market is not large, in the home area is not particularly large users (such as me), very friendly. The back of the charging base also has a winding function, according to the actual needto control the length of the wire, not because the wire is too long to appear messy. 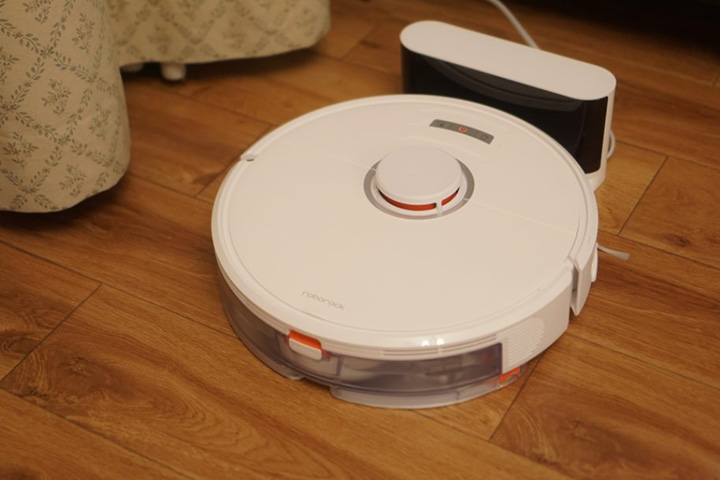 Stronger suction, in exchange for of course a better cleaning effect. Before the cat, the family's old sweeper robot was able to clean up the floor of the home. But since the cat has been in the hair-changing period since the cat (especially now the cat is in the hair-changing period, almost all the way down) every time the cleaning is done, i can still see small cat hair glued to the floor.

The stone T7's stronger suction solves this problem well, even if it doesn't have to be adjusted to the maximum gear, the stone T7 can cleanly complete the cleaning task, even without leaving a hair.

The suction effect you can refer to the figure below (standard gear). 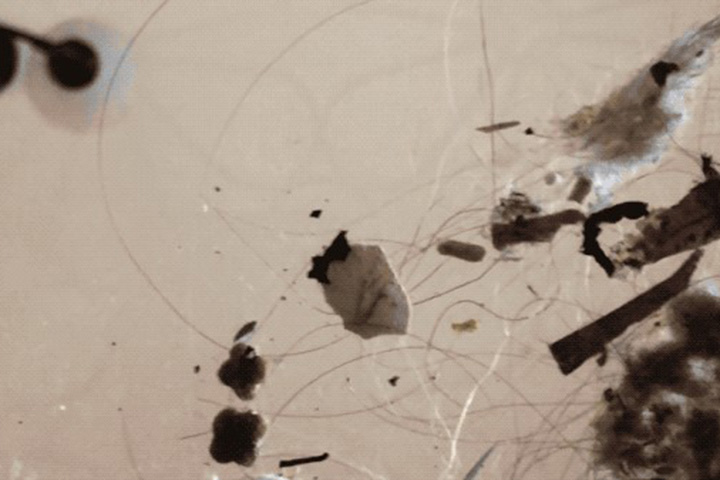 Like the previous T6, the bottom of the stone T7 is equipped with a one-sided rotating brush that better sweeps out the accumulated dust when cleaning the edges and corners of the wall.

The brush also features an intelligent speed adjustment function. Simply put, when the robot sweeps to the wall edge or corner position, the rotating brush rotates at high speed, and when in the non-wall side position, the brush's speed will automatically drop, avoiding the garbage flying.

Home has hostess users, I believe there will be such a trouble. Is the longer hair will easily be wrapped around the main brush, especially wrapped in the hinge, cleaning up difficult, long-term do not clean the words will affect the main brush rotation.

In response to this problem, the stone T7's main brush shaft is fast-cut design, with a simple turn, you can remove the shaft cap, easily remove the hair wrapped in it. 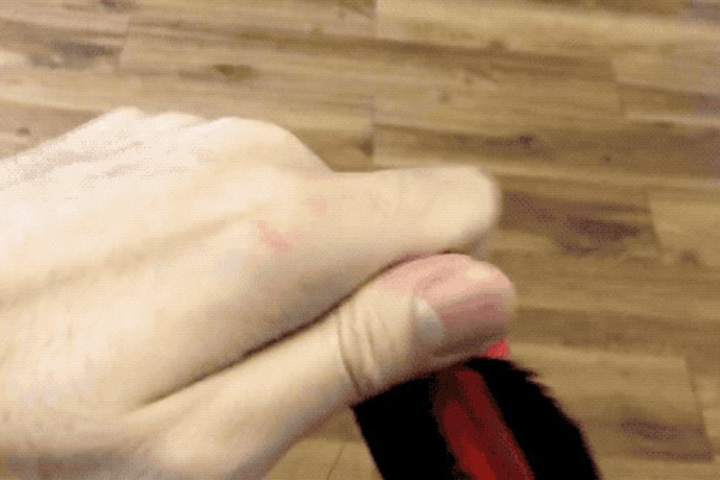 The next thing to say is that we are most concerned about the drag effect.

Starting with the hardware, the biggest upgrade of the Stone T7 is equipped with an electronically controlled water tank. Compared with the previous non-electric water tank, the electric control water tank has two main benefits.

The first is that the amount of water can be controlled. As long as those who drag the floor know, dragging the bedroom and kitchen are two different kinds of labor. Bedroom, study can actually be a month or two without dragging, each drag also only need to be light and relaxed can be dragged clean.

But for the kitchen and dining room, it seems that three days without a delay, the ground is almost like the vegetable market. Especially when there is a party, in the kitchen after a show of hands to entertain friends, dry smudges, no effort really difficult to drag clean. 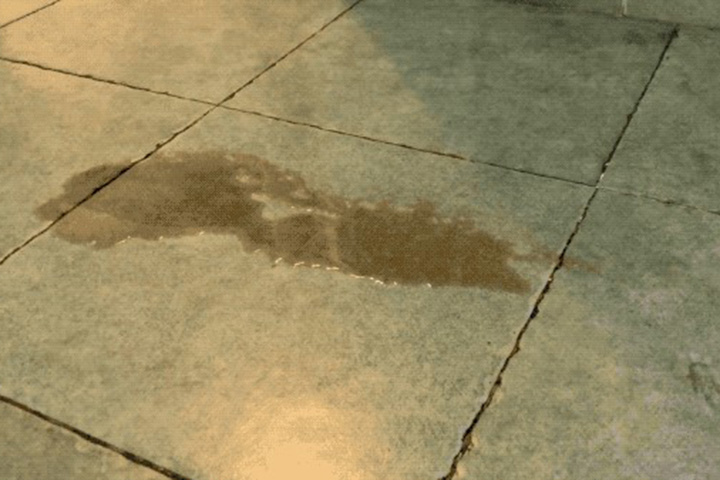 It is for this reason that water control is so important for sweeping and dragging robots. With this feature, when the cleaning mode of the sweeping robot is preset, you can set up a small bedroom water, living room water, kitchen water.

In addition, I also noticed that the Stone T7 has a more intelligent feature. For example, if I need edi-on the entire house today, the stone T7 will follow the usual path to clean the living room first. But if I set up a full house to clean, but the bedroom does not have to drag the floor, the stone T7 will first clean from the bedroom, and do not wet the mop cloth, keep the cloth dry, to ensure that the floor of the bedroom is not wet because the mop is wet.

In addition to the controlled amount of water, upgrading to an electrically controlled water tank has another benefit: the ability to set up drag-ban areas.

Here, perhaps readers will ask, this is not a software upgrade can be implemented by the function? Not really.

The stone sweeping robot T7 is equipped with electric peristaltic pump, which has the advantages of high precision and anti-blocking

Because the non-electric water tank has a feature, that is, as long as the sweeping robot moved, the water tank will be out of the water. That way, even if the software is upgraded, the T6, which doesn't have an electronically controlled water tank, will hit the wet surface in the no-drag area.

And with the ban area division function, one, some places can be set up as a ban drag without frequent drag, reducing the frequency of water tank filling.

Second, if there is a carpet in the home, the carpet area can be set up to sweep, so that the carpet on the debris hair does not suck, also not afraid of the carpet will be wet.

According to official data, the stone T7 has an area of 248 square centimeters and a ground pressure of about 300g. The actual drag effect, I am satisfied.

My cat has a nasty habit of eating food out of the bowl before eating it. In this way, dry cat food is good, as long as suck away, but if it is wet can, it sometimes eat leftover residue, it is easy for us to step on the ground one by one. 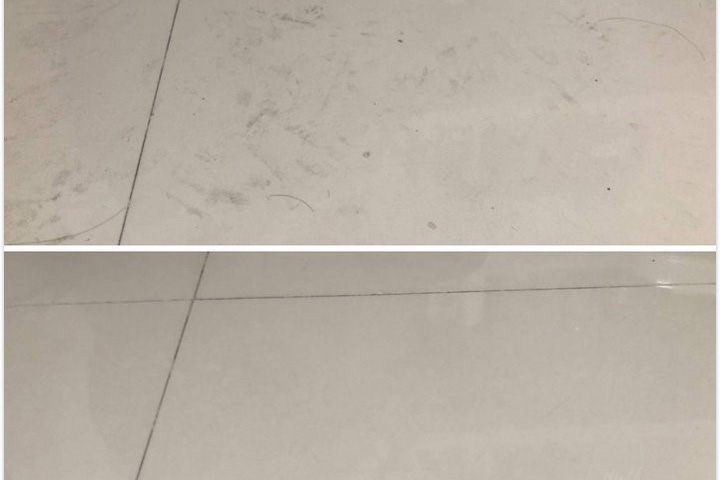 Everyone knows. It takes a little effort to drag clean up the dry dirt. And after the test, the stone T7 to deal with this stain, as long as the set of a large amount of water can be done.

In terms of tank size, although it may look small, it actually reaches 297 ml. For my family a room, one hall a kitchen a toilet size of 80 square meters, living room, kitchen, toilet a drag a day, bedroom three days a drag, just three days plus water.

However, there is a little want to slot is that the stone T7 water tank water infusion is relatively small, and there is a dense filter, so when the tap can not open large, can only slowly wait for it to fill. 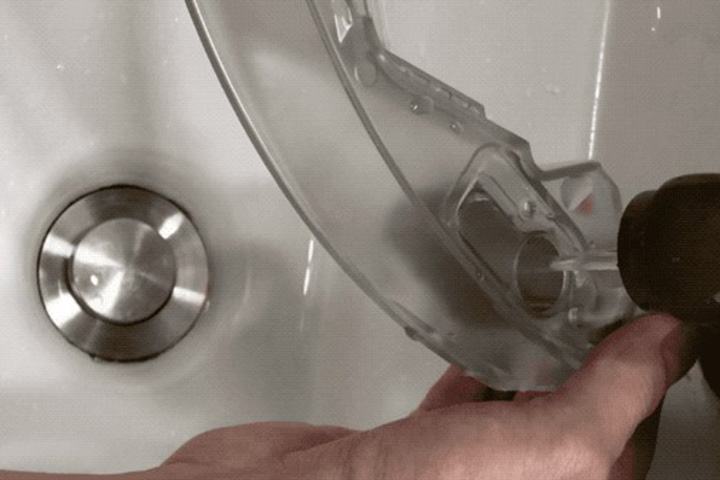 As for the automatic cleaning mop function, less than 3000 stone T7s are certainly not equipped, obediently regularly removed to clean it.

This time the map system for the Stone T7 was upgraded from 3.0 to 4.0. The main upgrade point is the route upgrade to a more efficient Z-shaped sweep route.

After the first pairing, click Clean and the stone T7 models the map for the first sweep. As measured, my 80-square-meter house will be modeled for the first time in just over an hour. The map is also automatically partitioned once, and you can also manually make more detailed adjustments to the partition. 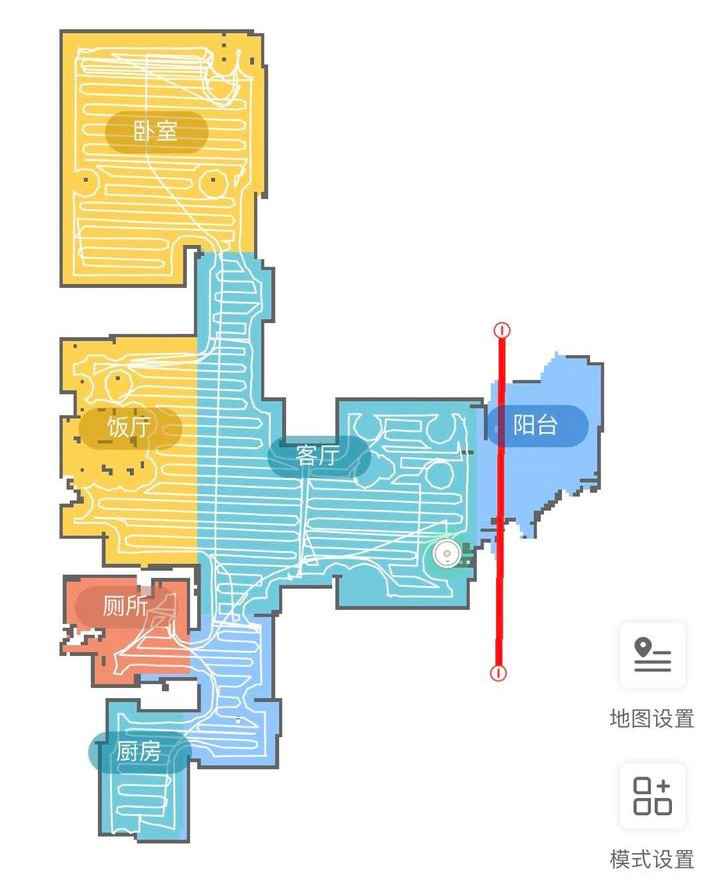 In addition, the Stone T7 now holds maps of multiple floors. When the robot is moved to a different floor, it can also automatically identify the floor it is on, without having to manually switch maps. But since I haven't been able to live in a villa yet, this feature can't be experienced.

Finally, back to the question at the beginning of the article, can the stone T7 achieve the effect of 1-plus-plus?2? From a practical point of view, after this upgrade, I think it is possible. Of course, it's not as effective as a robot like iRobot, which is dedicated to mopping, and not as much as a 40-piece one-hour cleaning aunt, like some corner seats or when there's a drag that's not clean, the mop also takes you to spend some time cleaning.

But from the overall experience, I no longer worry about the carpet at home will get wet, also will no longer be upset to see the ground drag dirty stains, can meet my desire to spend a good job of two jobs, I am still satisfied.