Selfie sticks are now more than a convenient tool for shooting photos while travelling, they can even be used as a good helper for getting started with mobile phones photography or video shoot. but because of their cost constraints, it's often hard to add some added value beyond providing a longer selfie perspective.

While the mobile phone gimbal is superior in shooting stability, it may require more than the selfie stick in terms of carrying flexibility and price. 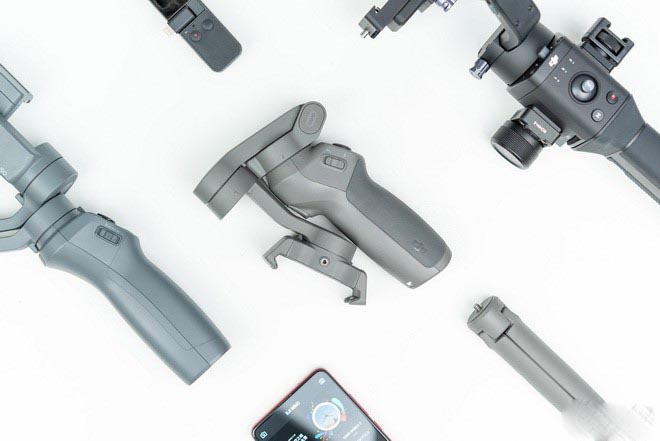 After getting involved in the mobile phone cloud platform in Dajiang, and taking out OSMO, it quickly showed the fierce temperament of the butcher price than Xiaomi. OSMO mobile phone Gimbal 2 gave up the OSMO+'s own zoom lens to kill the price below 1000 yuan.

To the territory of every generation of functional upgrades to make people feel the character of the previous generation of white buy, do you think the price will be more expensive?

Dajiang said no, OSMO Mobile 3 mobile phone gimbal will be reduced by two hundred around.

Although we can almost directly conclude the purchase from the perspective of pricing, we still have to look at what changes have been made to the third generation of OSMO Mobile on the basis of a year and a half ago, and what will happen differently. 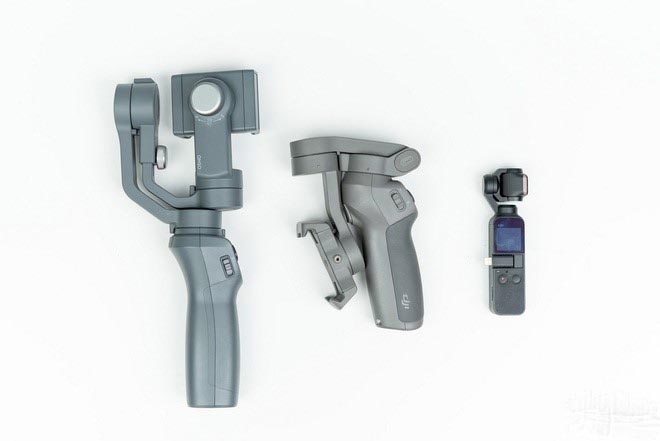 The first thing that is most intuitive to feel is of course the folding design of the head of the cloud. The biggest advantage of the foldable arm is the convenience of bagging, slightly larger pockets, such as summer multi-bag seven-point pants side pocket it is more relaxed, the previous generation because can not fold, to seat belt out also have to take that foam box, very inconvenient.

This is the most central experience change for OSMO Mobile 3, which really makes it close to the portability of the selfie stick. 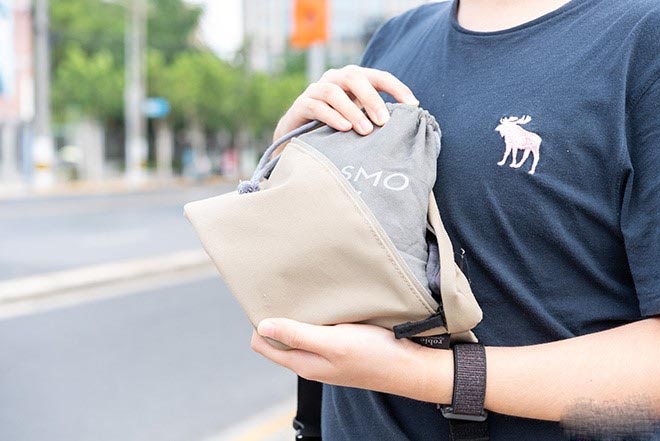 folding need slot slot slot slots, if the two marks are not aligned, especially on this side of the horizontal axis, there will be very large resistance when the hands-on fold, this time absolutely do not superstitious strong miracle.

In fact, in accordance with the correct position fold good words, the three axes of the cloud station will lock the wire does not move, stability is very good, will not be like the previous generation, carry more do not worry. 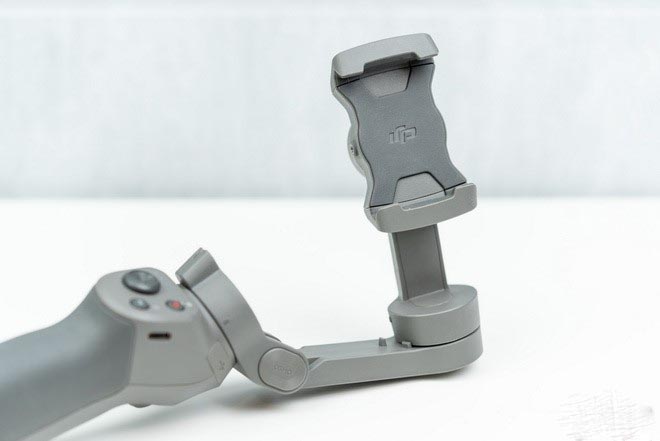 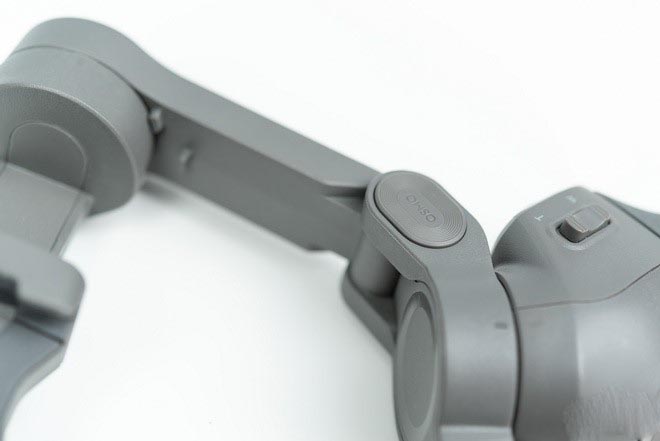 OSMO Mobile 3's own layout design than the previous generation is also more scientific, although generally we do not expect it to charge the phone how much electricity, but the USB-A charging output from the front rear to the side of the charge belt is still convenient. 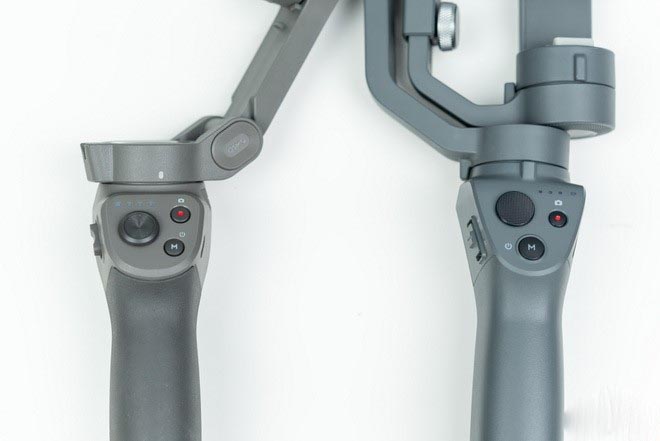 The operating surface also has fine-tuning, the light will be the rocker to squeeze down, giving the thumb more operating space, plus the rocker from the convex to concave face, the overall feel of one-handed operation actually improved. 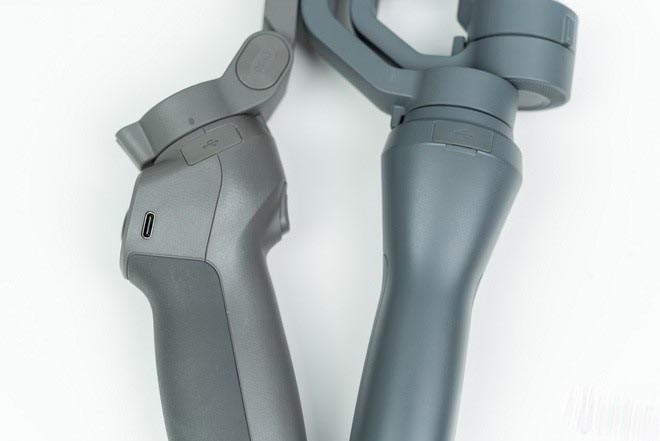 The shape of OSMO Mobile 3 also has a slight adjustment, if the horizontal axis as a flat reference, the body than the previous generation has a more obvious forward tilt, and the trigger part of the forward also made a further bump, which will be more ergonomic in the grip. Grip place to fit the tiger mouth and thumb finger root part of the new addition of anti-slip rubber pad, feel and stability is better, use more comfortable.

However, with it and the use of mini tripod scaffolding should pay attention to the extent of the scaffolding cannot support its center of gravity, the original set is very good to use, but I believe you will also need to have the ability to stretch the scaffolding. 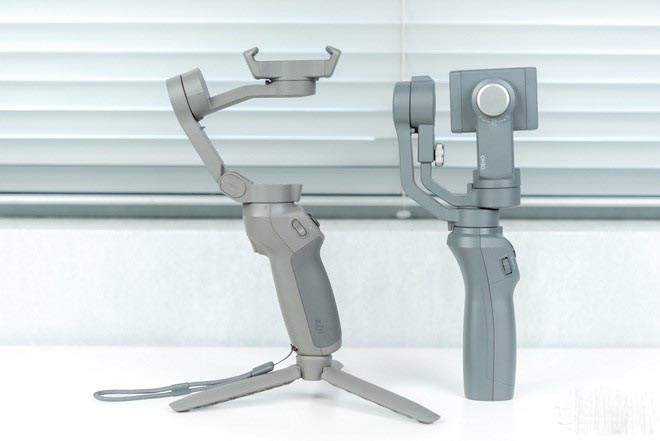 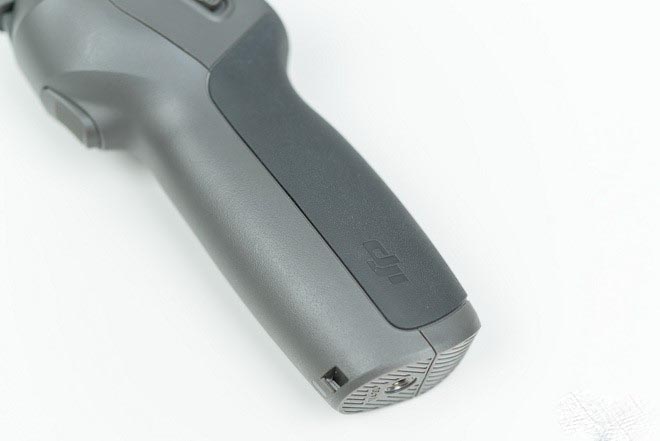 In fact, if it really wants to say that it is more beneficial for one-handed operation, I think it is much more significant because the front cut off the vertical shaft rocker arm to lose 80g more than the modeling and folding design significance.

Although I held up with it a hand camera hand mobile phone to shoot the launch, at most can only adhere to less than half an hour, but on my hand the next generation of mobile phone cloud, I think maybe 10 minutes almost want to give up.

Finally, OSMO Mobile 3 takes back the second generation of lost index finger triggers, and the return of this key will help improve the one-handed experience, which will be detailed next. 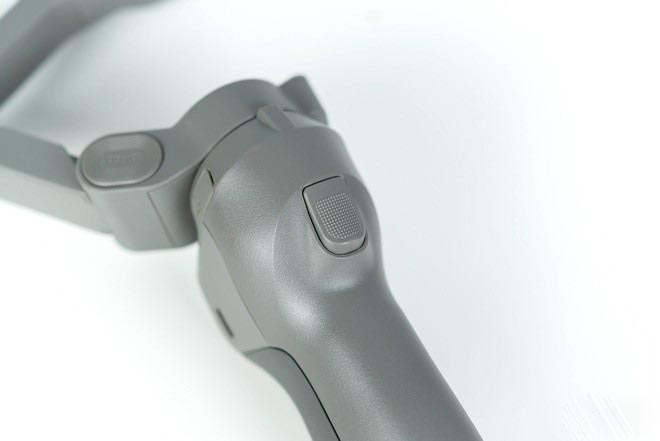 Get everything done with one hand

From the first generation to the second generation and now to OSMO Mobile 3, DJI's idea extends from abandoning add-ons to further weight-reduction, apparently wanting to constantly reduce the power needed to use it. I also mentioned one or two one-handed use, which is a relatively complete three-axis pan/tilt in OSMO Mobile 3. It is a large self-timer in the form, but it can handle complex shooting tasks under the control of the right thumb and forefinger. intention. 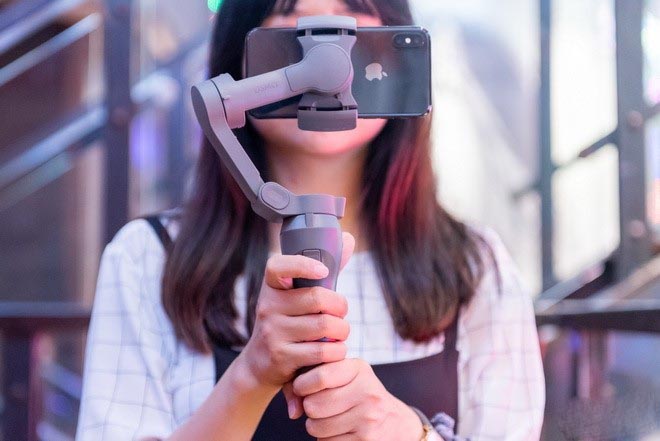 Like the previous generation, the thumb takes on most of the key maneuvers of the gimbal using OSMO Mobile 3, and most of the time the thumb is actually on the rocker to control the head angle, and the zoom slider on the side is not used so often. Occasionally, the M key is used to open the main menu of the DJI Mimo app, or double-click to switch the Z-axis landscape/portrait, or tap the Take/Record key.

If you like everything in your own hands, your thumb softens may be more stressful for long periods of time. 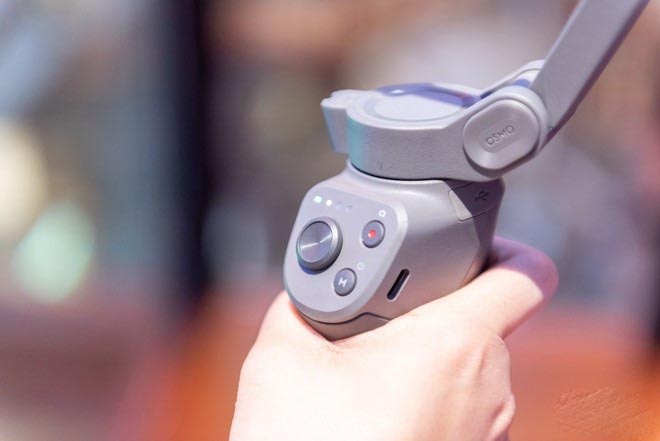 Adjusting the axle speed is a viable way to reduce the thumb workload. OSMO Mobile 3's rotary motor power track and the previous generation similar, feel soft, even if the transfer to the fast gear also feel a little not hurried, of course, for the mobile phone this speed is more appropriate, and the mid-range is relatively slow, the rotation time will be longer, the horizontal axis from one end to the other end can be about four seconds,

If you often need to manually change your perspective, your thumb will get tired faster than your arm. 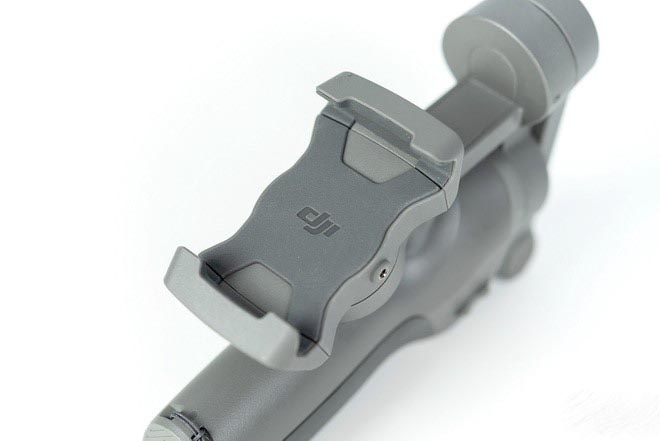 The index finger is responsible for the trigger, this key in the interpretation of the big frontier is the mode switch key, in actual use, it has three uses, short press once for a key to find the face in the screen automatic intelligent follow; Short press for three taps to switch the front/rear camera.

But I think it would be nice to press the three-time requirement very high, if only i could customize the function of the key. 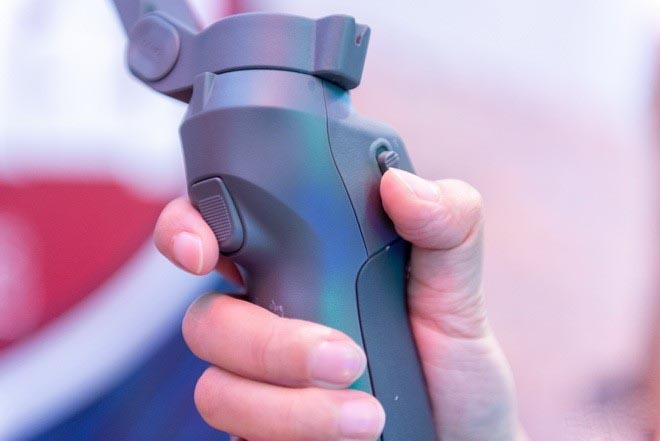 OSMO Mobile 3's one-click face recognition follow-up seems to be a little better than the previous generation, much less than a year ago, and it's more likely that this is a boost in the software algorithms of these times.

But if you want to track something other than your face, you have to frame it on the screen with your other hand, so it's not a one-handed one. 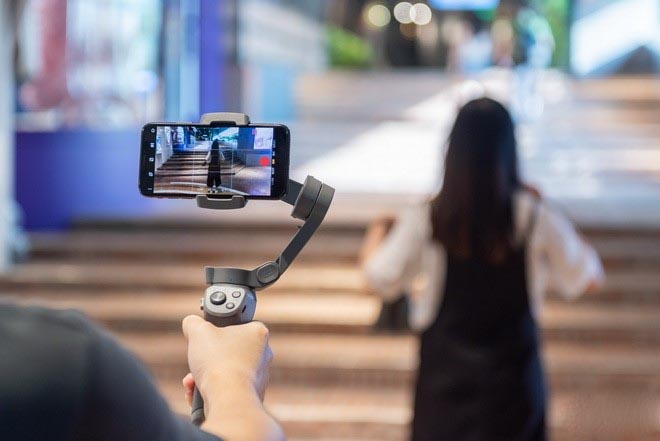 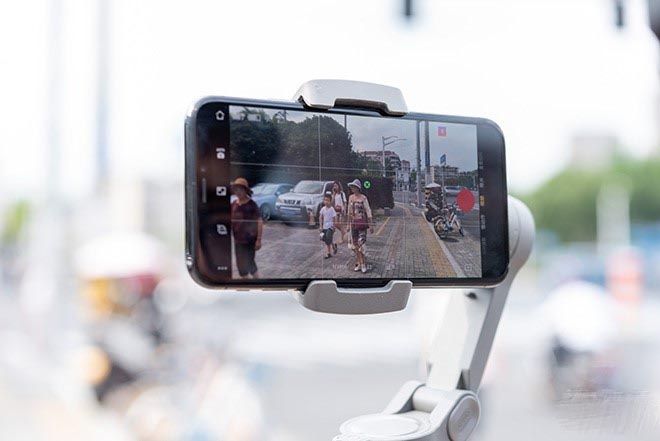 Cutting into different segments lets you shoot in segments, and finally stitch them together, is a fast and efficient short video-to-shoot-to-share feature, and comes with a psychedelic transition effect similar to the quivering style, which is the last step shared that still requires you to edit the content with your hands and publish it.

Finally, like its predecessors, OSMO Mobile 3's video shooting stability is very good, the general city streets walk ingress or quick walk hand-held shooting, that kind of picture jitter is suppressed to carefully observe to feel, the shaft of the motor output is uniform, the use of the rocker to turn the lens view is very smooth.

Simple summary of the words, as long as you do not use self-selecting target tracking, do not pursue short video immediately after uploading a circle of friends, this is a one-handed completion of all shooting operations of the mobile phone cloud. 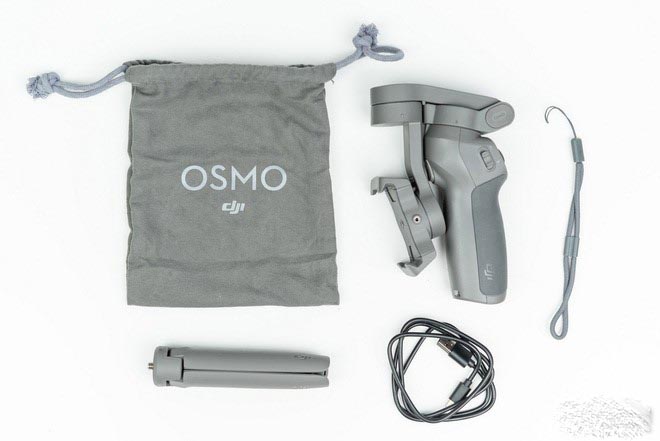 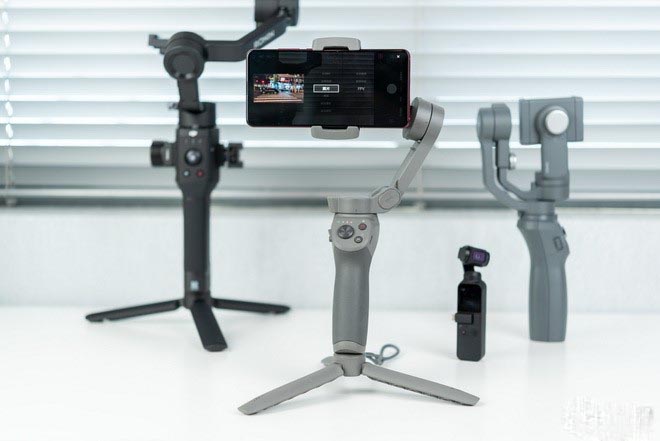 Of course, Daji such an engineer character of the company, product refinement is also full of science students of the non-trim able edge sense, OSMO Mobile 3 just got hands when there is no way to enable all its functions, for example, in the DJI Mimo app, the default function of the M key is only between the camera/ camera switch One-click smart tracking is turned off by default, and this feature also conflicts with gesture recognition auto-shooting...

But this small flaw doesn't stop OSMO Mobile 3 from being the most valuable mobile phone head on the market today.