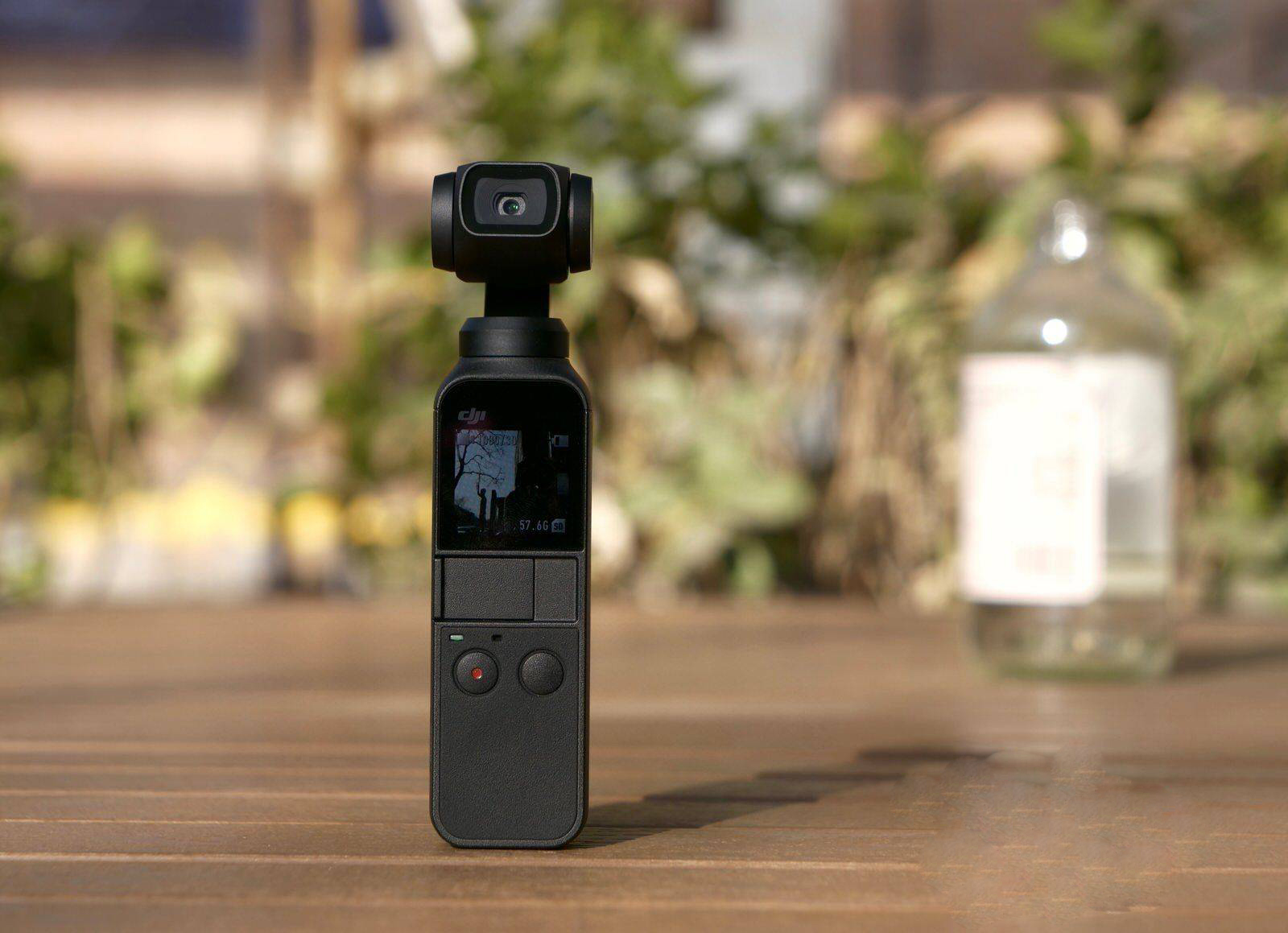 In the size of the lipstickDJI pocket cameras are equipped with three-axis mechanical platform, the picture quality is comparable to high-end mobile phones.

Before talking about today's protagonist, DJI's pocket camera, we might as well consider a question: What kind of equipment would you choose to take a video with a stable picture and good quality?

Mobile phones may be the first answer most users think of, and in many cases this is already an "enough" option.

With the improvement of the sensor, the improvement of the ISP and the evolution of the algorithm, many of the high-end mobile phones represented by the IPhone have had a very good picture quality, with EIS stabilization (OIS's limited help to video) can also take a more stable picture, even once a long period of attention to the radio problem is also in the IPhone XS and other flagship aircraft have been a good solution.

But there are two problems with mobile video recording: The first is that the compensation range of electronic stabilization is limited, slightly larger jitter is basically no longer, the second is that the phone itself cannot provide additional support points, in the outside think of a person to shoot themselves a little farther away from the lens will often be more difficult. 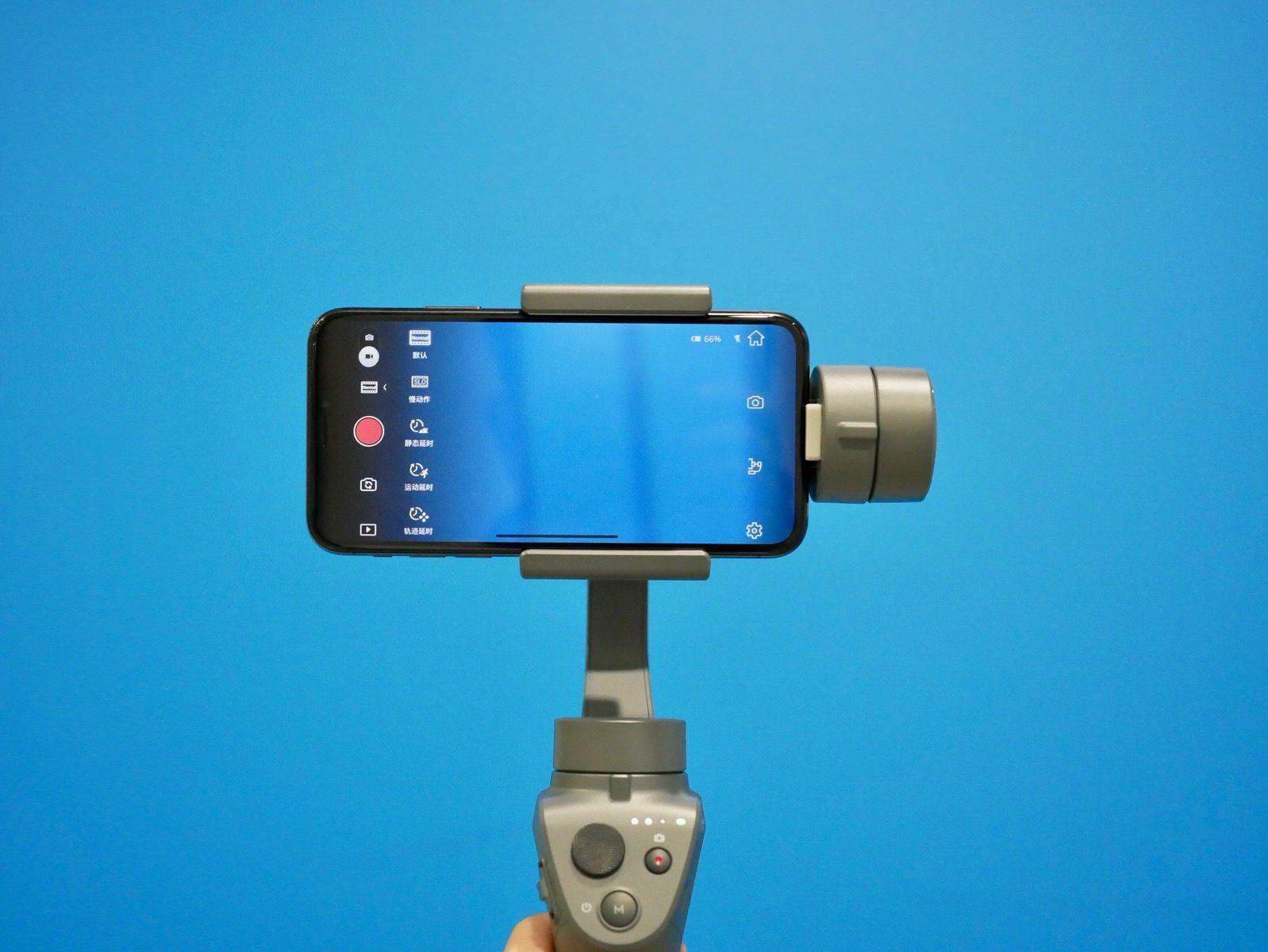 However, due to the need to be equipped with a mechanical platform sufficient to support the weight of mobile phones, coupled with essential handles, batteries and other components, the size of the mobile phone platform is not small and it is difficult to fold compression, not convenient.

So is there a device that can keep high-end phone video recording quality and have the same stable effect as the mobile platform? 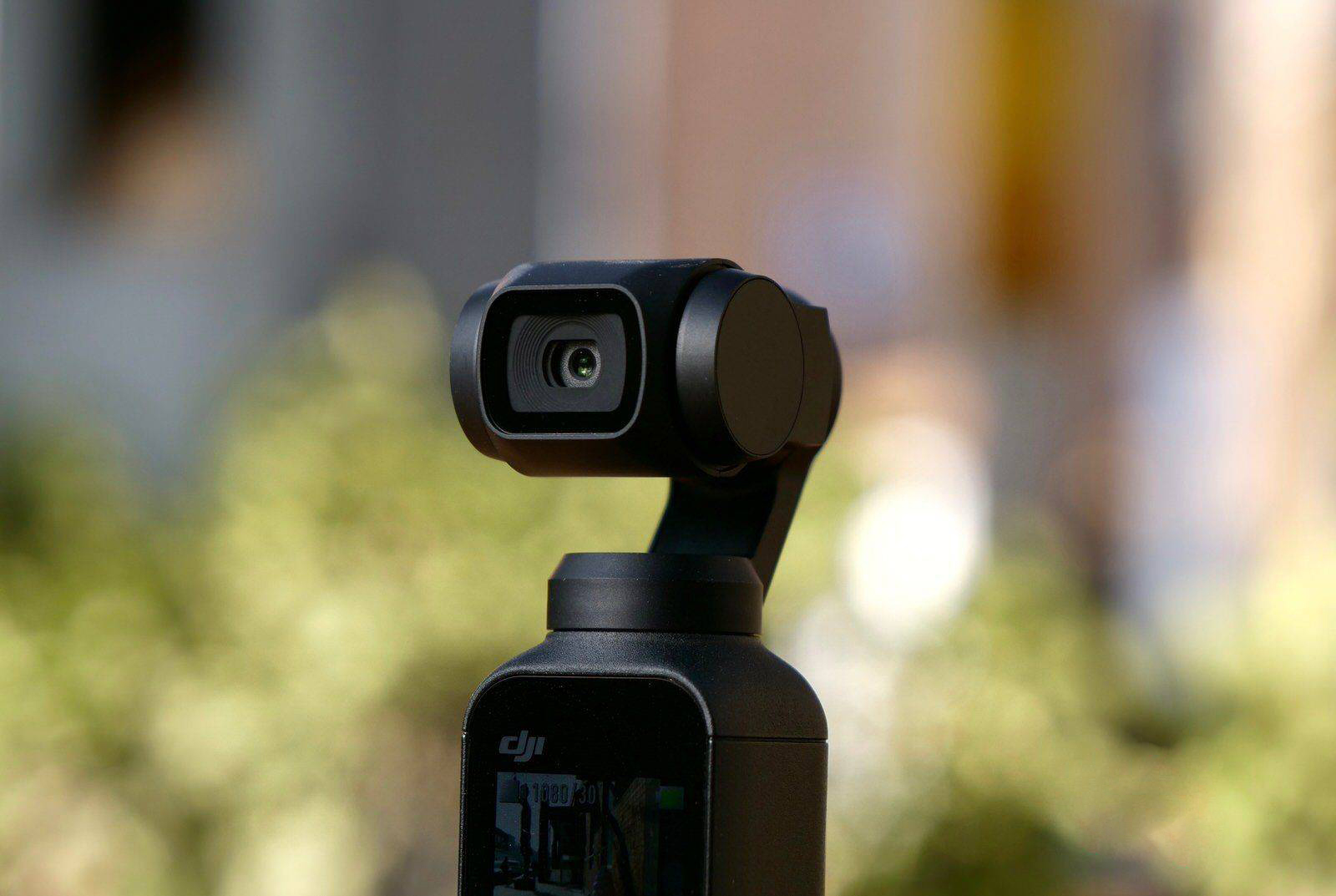 Compared to the electronic stabilization used through the screen cutting on products such as smartphones, GoPro and Insta 360, the advantage of the DJI OSMO Pocket Camera mechanical platform is that it does not need to cut the picture (compensated directly through the mechanical motion of the gimbal), and the range of jitter compensation is greater.

The platform contains a 12 million megapixel, F2.0 aperture camera module, the model of the sensor is Sony IMX378, that is, the first generation of Google Pixel, Xiaomi 5s and other mobile phones used on the phone, and Mate 20, Meizu 16 and other mobile phones used on the IMX380 tied same door, size reached 1/2.3 inch, single pixel 1.55 microns, in the mobile device belongs to the larger "bottom". 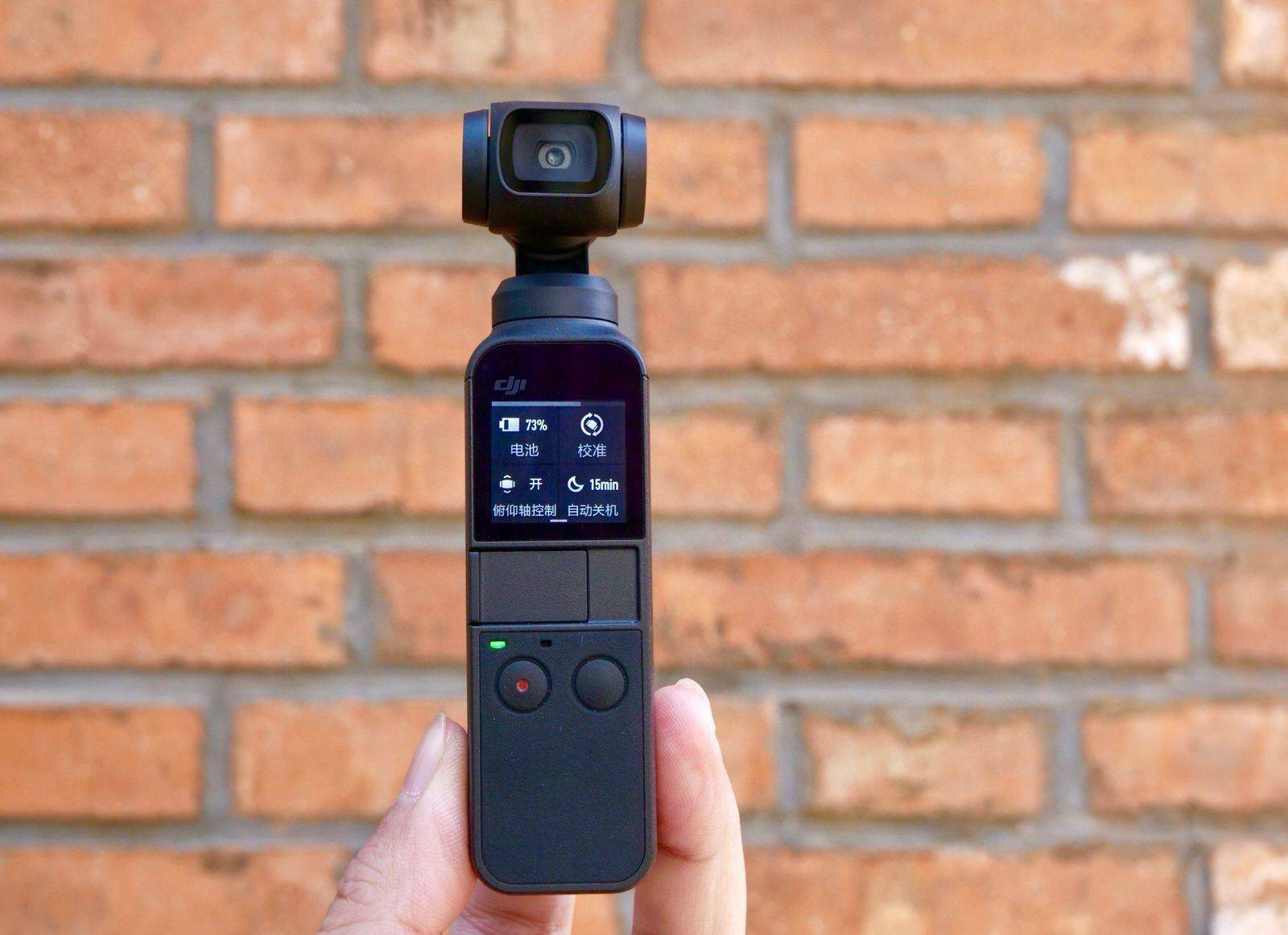 In terms of video specifications, DJI OSMO Pocket Camera support 1080p and 4K two resolutions, both of which support 24, 25, 30, 48, 50, 60p six frame rates, where 1080p and 30p can have an ultra-clear picture quality option, presumably to enhance detail and dark light performance in a superb way.

DJI OSMO Pocket Camera the camera's equivalent full-frame focal length of 26mm, this focal length for doing Vlog is not particularly wide, but because the DJI OSMO Pocket Camera are compensated by the mechanical platform, recording video when cutting off the part is very small, the actual use of good. If you want to take more pictures in, consider adding a selfie lever.

Beneath the mechanical platform is a very mini 1-inch square touchscreen. 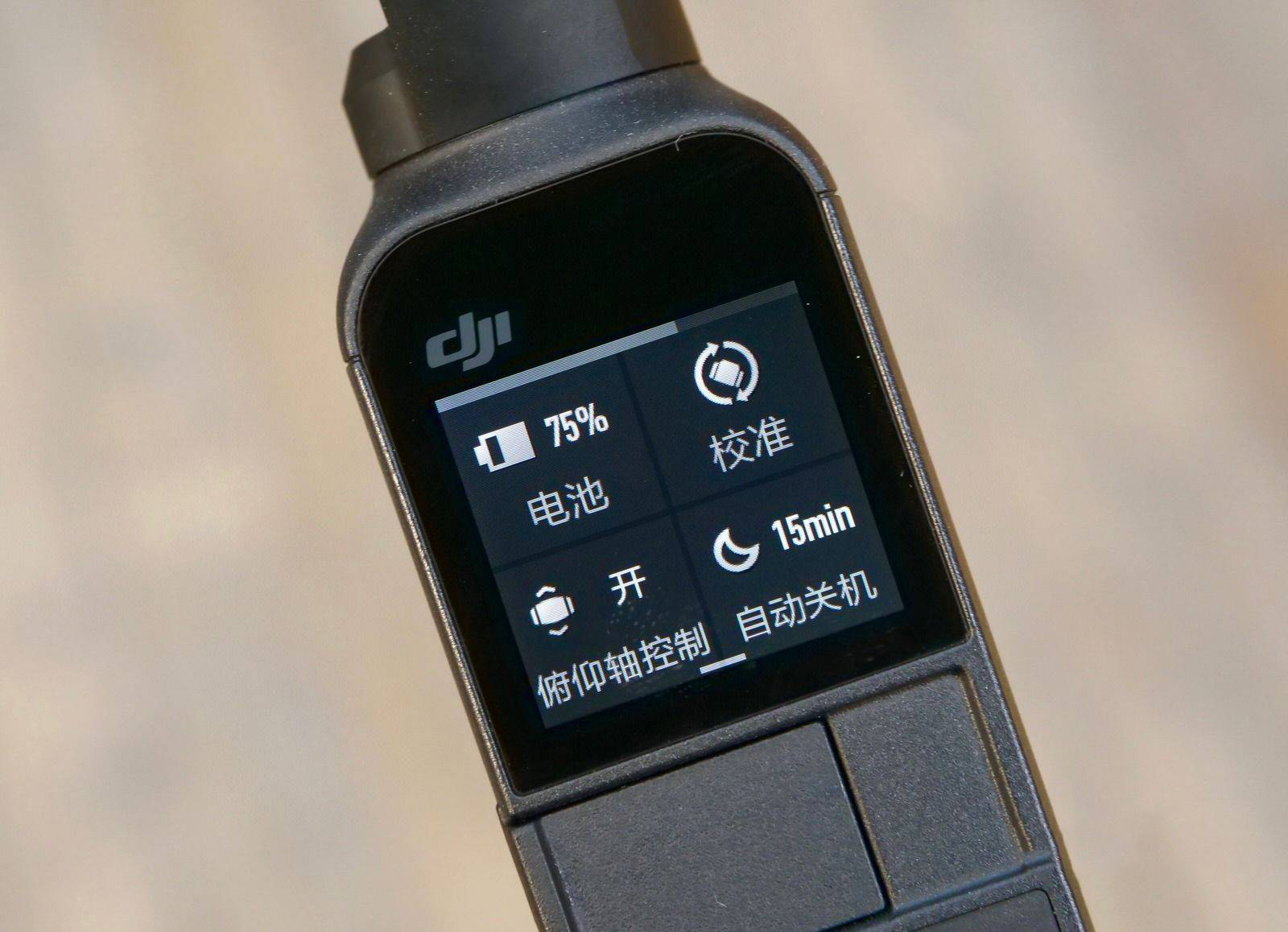 Don't look at this screen is very small, but its full of different functionalities. In addition to the basic viewfinder function, DJI also designed a rich gesture features for this small screen.

Sliding inward from the four edges of the screen allows you to pull out different functions like:

Sliding inward from the left Edge is an album, and the right edge slips inward is the choice of shooting mode (photo, video, static delay, track delay, panoramic photo), sliding down from the top is the setting item, sliding up from the bottom is some quick operation (switch the camera direction, Cloud station back, follow speed selection).

In addition, in the shooting state, you can also do some operations on the touchscreen, such as sliding up and down the right edge of the screen to adjust the pitch angle, after shooting double-click the face can track this face (front shooting will automatically track the face, do not need to manually select). 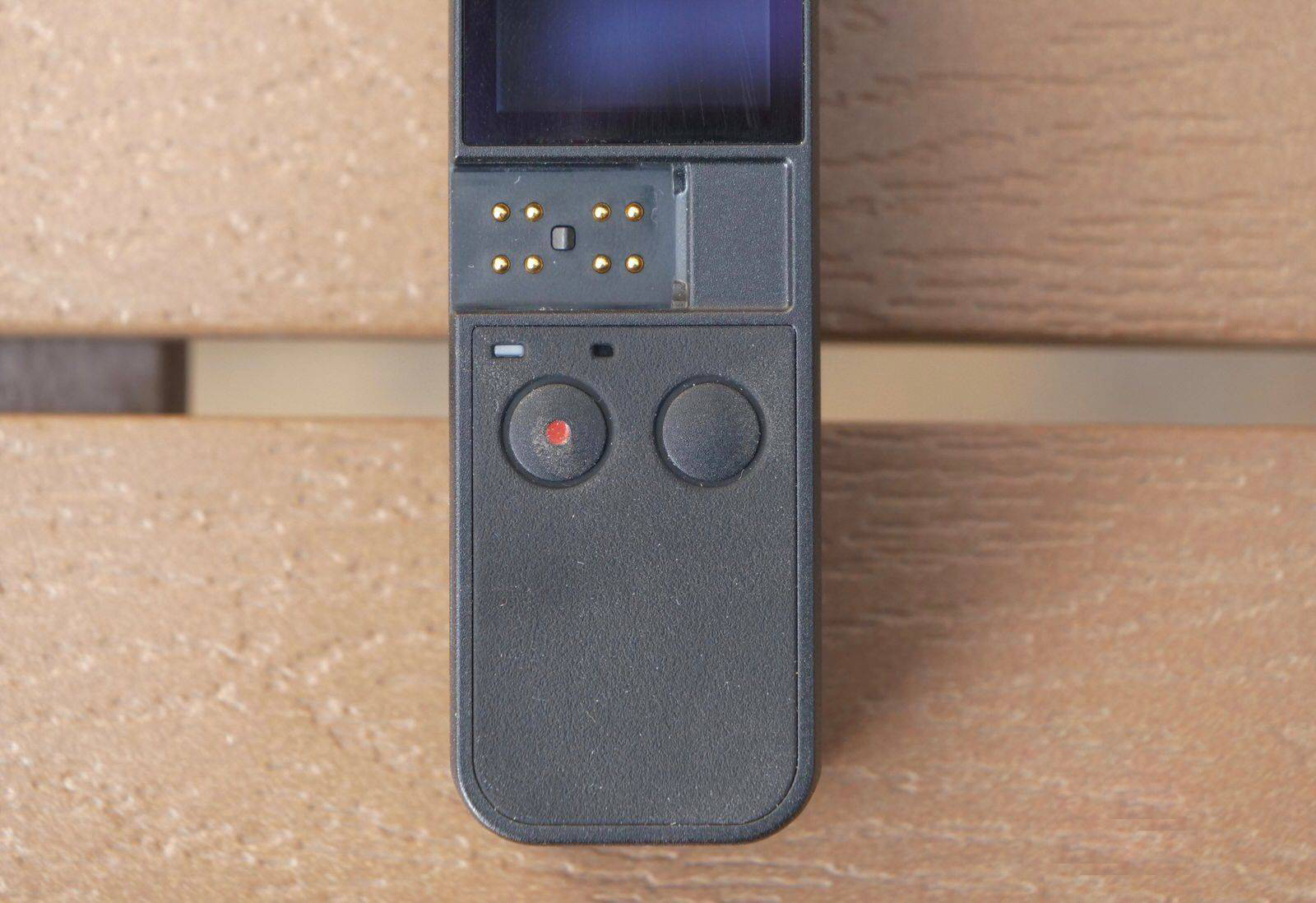 At the bottom of the screen is a plastic cover, which can be removed to see 8 metal contacts, an expanded interface that DJI has customized for the DJI OSMO Pocket Camera.

The user can choose to insert the Lightning plug, usb-c plug attached to the package, and then connect the DJI OSMO Pocket Camera directly to the phone (see figure below). In response to this expansion interface, DJI has also launched a number of original accessories, as detailed below. 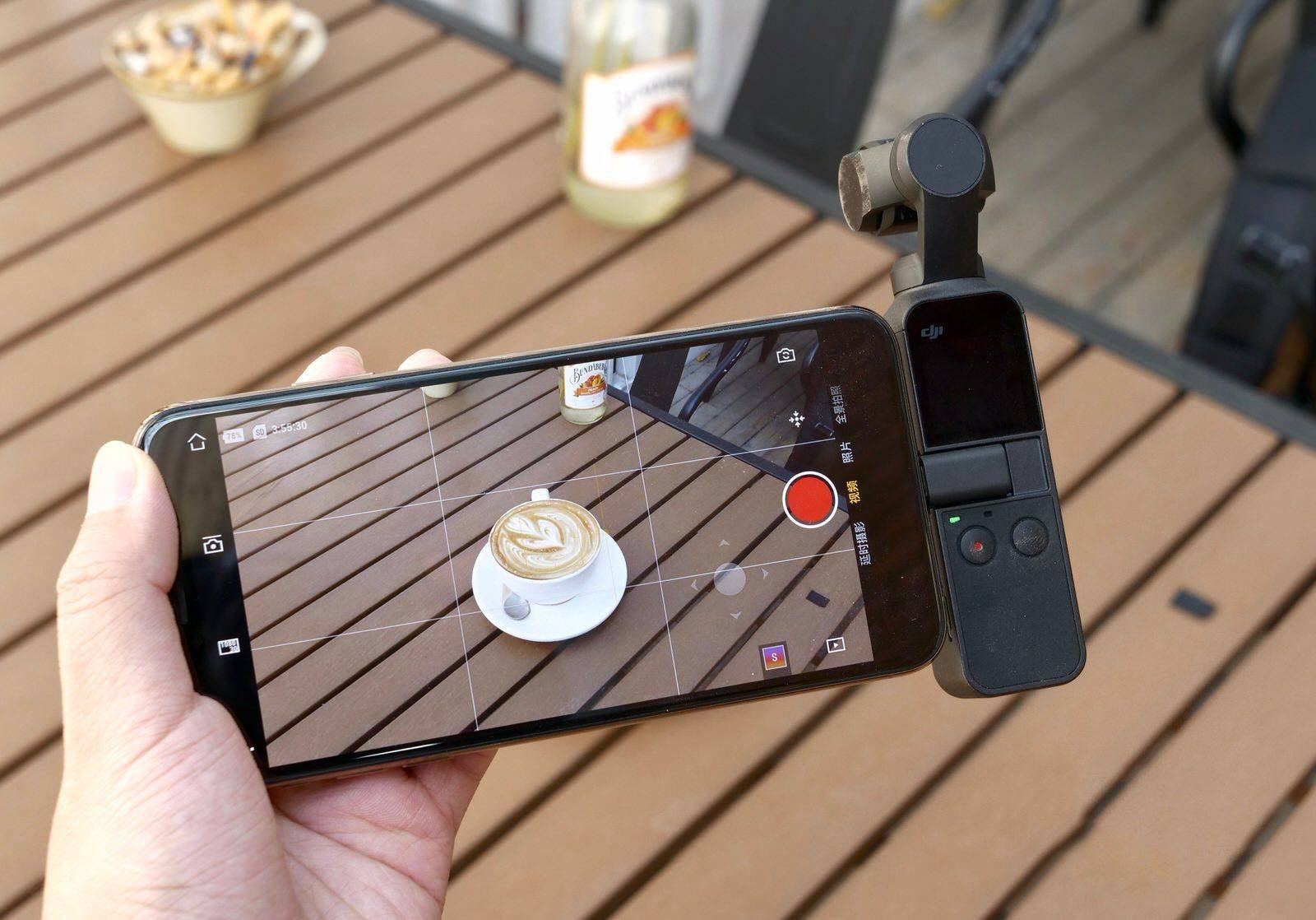 Below the expansion interface is the two solid keys, the left side of the red dot is playback pause, the right side is the switch machine. 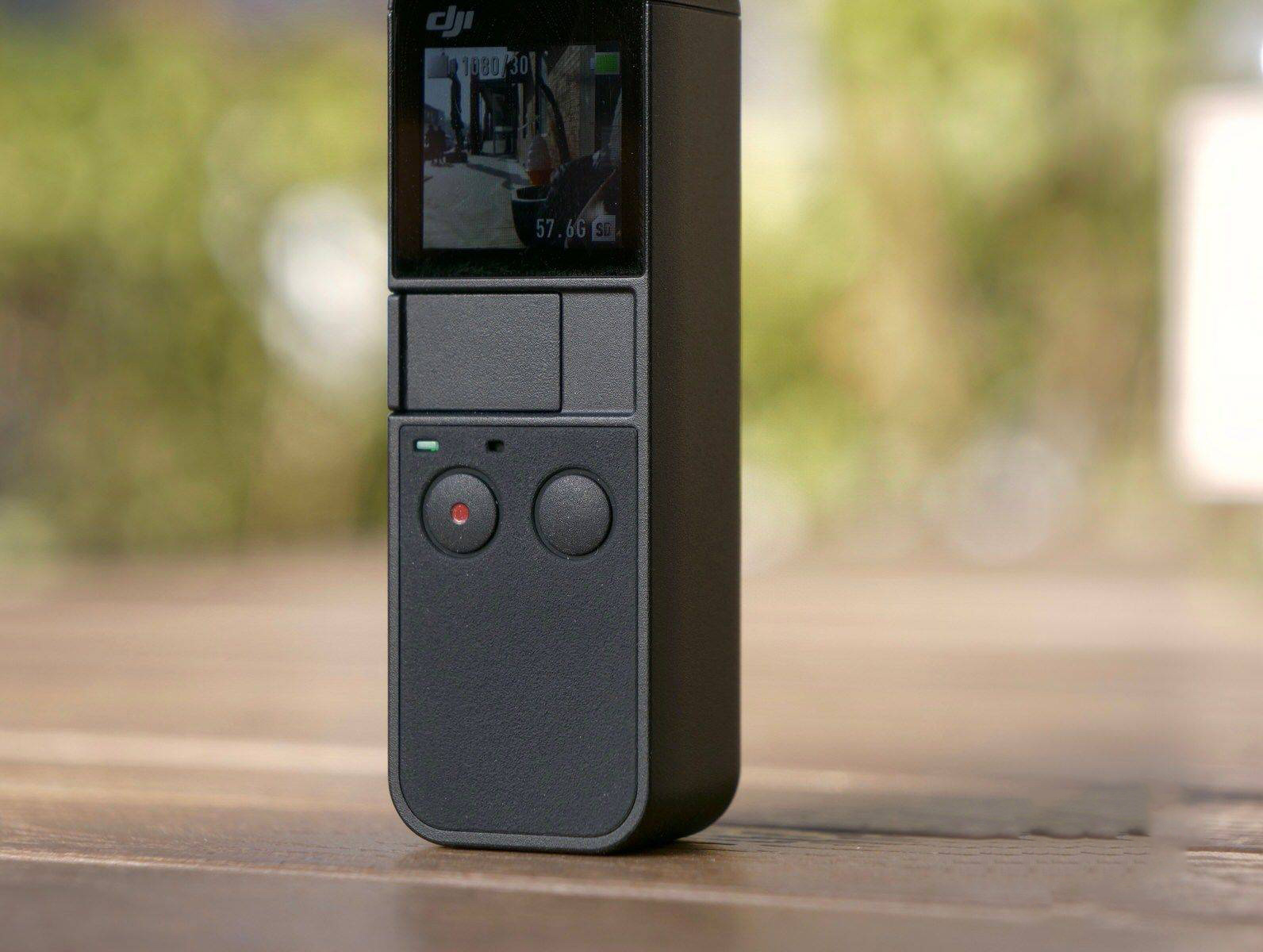 Two keys in the middle of a slightly above the position of a microphone interface, with the bottom of the microphone, you can achieve a good audio and noise reduction effect. 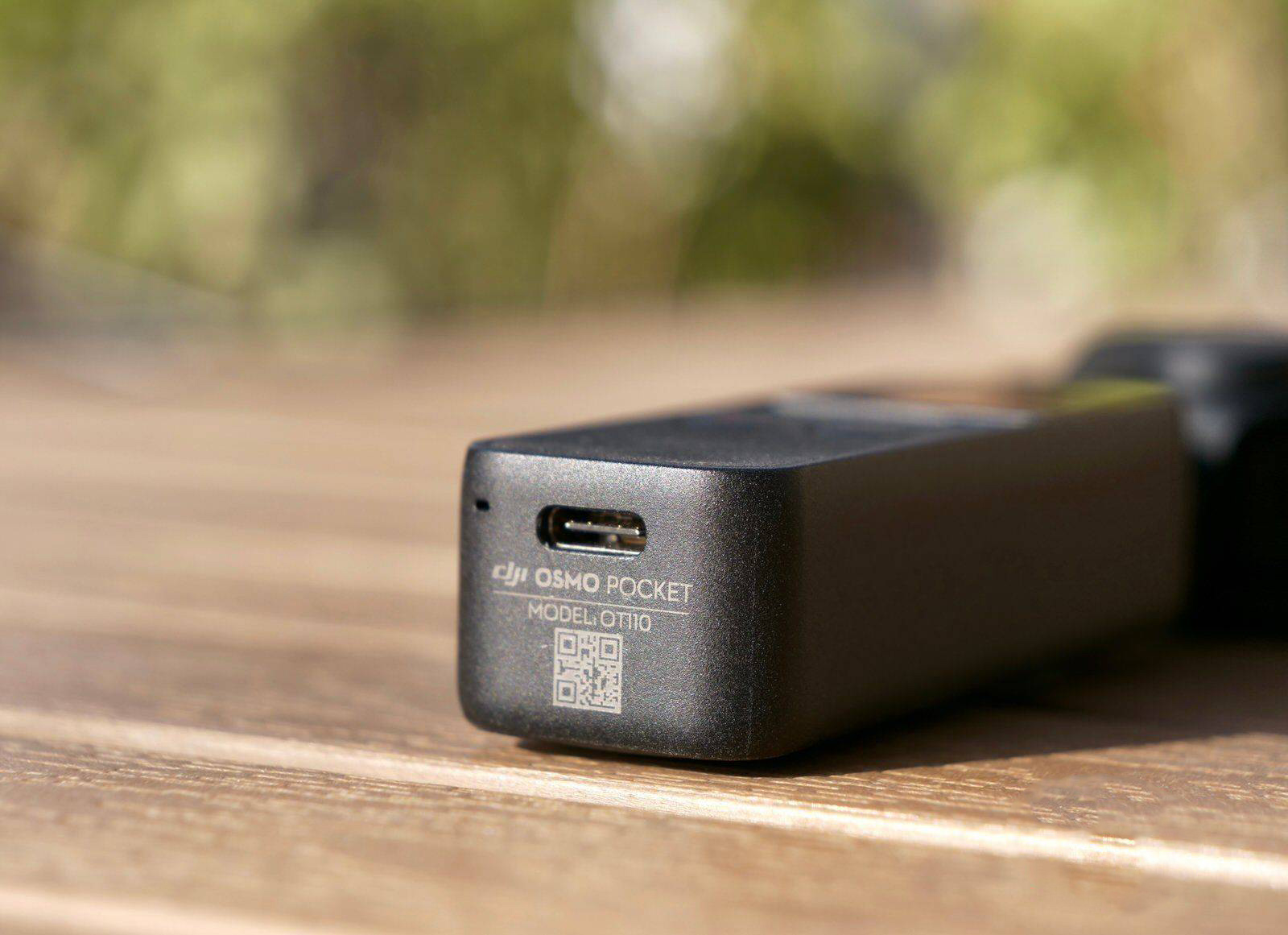 Turn to the bottom and you can see a usb-c interface and the microphone opening we just mentioned. Since the bottom of the DJI OSMO Pocket Camera is a plane, it can be placed stably on the plane, thus achieving some shots that are slightly farther away. 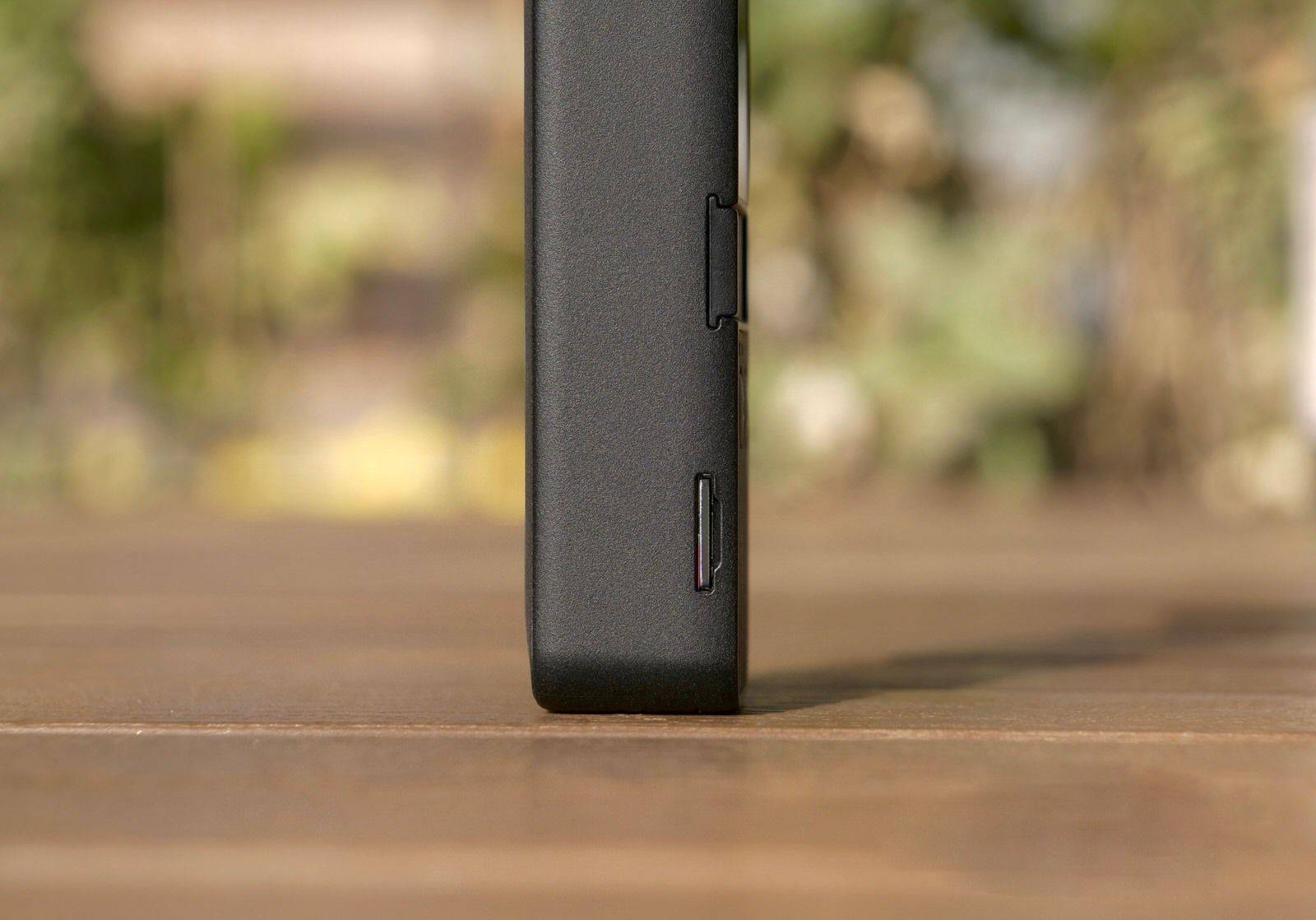 There is also a micro SD card slot on the left side of the pocket eye, with a maximum support capacity of 256GB, and it is recommended that Micro SD card write speed should not be less than 15MB/s (note is written), taking into account the highest shooting code flow in the pocket eye.

We should also note that the body of the DJI OSMO Pocket Camera is very, very small. 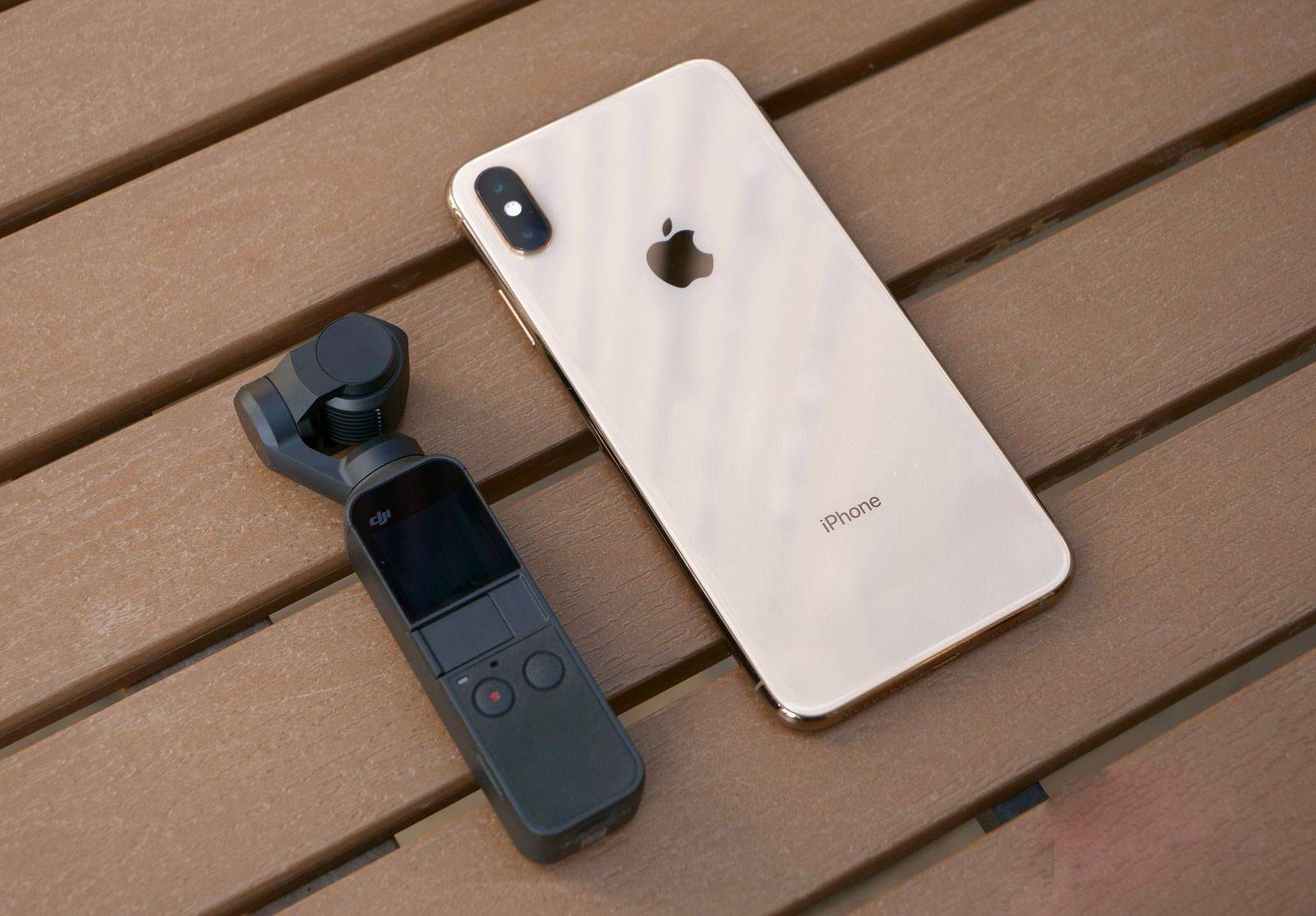 It has a machine length of just 121 millimeters, is much shorter than the mainstream smartphone, and weighs only 116 grams, just as far below the mainstream phone. DJI says the volume of the DJI OSMO Pocket Camera is "like lipstick in a lady's hand," and I don't remember any lipstick having that volume, but the volume control of the DJI OSMO Pocket Camera is really remarkable. 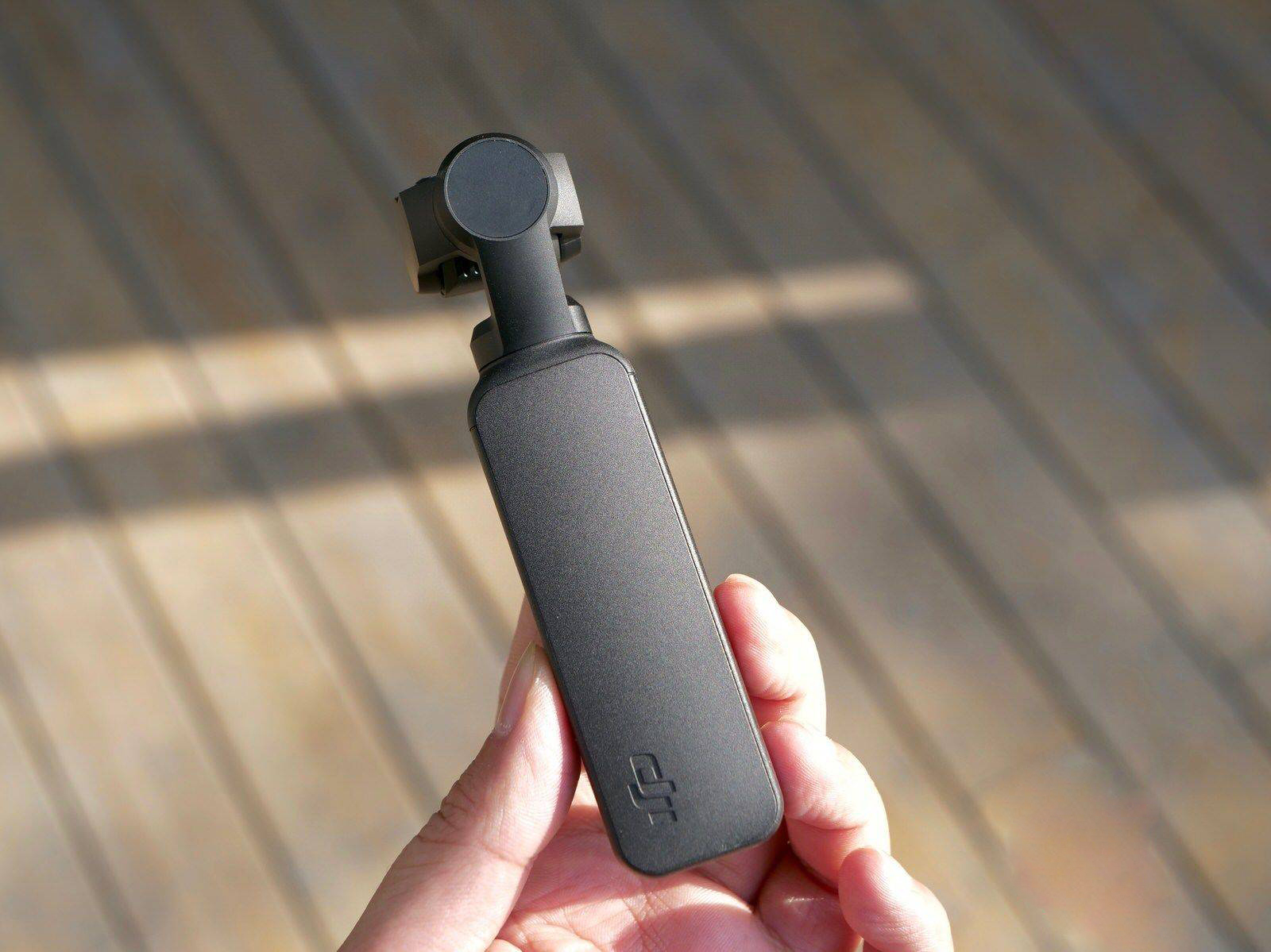 What is valuable is that in this volume, the DJI OSMO Pocket Camera do not compromise on life and heat dissipation.

Although the nominal battery capacity is only 875 MA, but the DJI OSMO Pocket Camera of the battery voltage has 7.7 V, calculate the energy reached 6.7 Wh, for this volume of equipment has been quite large. The actual performance is indeed good, recording ordinary 1080p 30p video can adhere to 140 minutes, 4K 60p can also reach about 100 minutes, this number and Panasonic GH5 and other cameras similar, belong to the excellent standard.

It is worth mentioning that in the case of extremely small size and no active heat dissipation measures, the DJI OSMO Pocket Camera, although the fuselage will be a bit hot when recording video for a long time, but there is no problem due to excessive temperature caused by forced interruption.

Can be seen, thanks to the real three-axis mechanical platform, DJI OSMO Pocket Camera of the picture stability compared to the IPhone, GH5 has a clear advantage, the picture is smoother, in the stairs, turns and other jitter will be particularly obvious.

FPV means first man view, which is the first perspective. After starting this mode, the pocket eye will only filter out a small range of jitter around 10 degrees, retaining a wide range of movement, so that in the shooting of mountain cars, skateboards and other sports scenes to obtain a more sense of generation of the picture, when the DJI eyes are basically equivalent to a GoPro such a sports camera.

With a smooth and stable picture, here's what to do is make the video you want. For ordinary enthusiasts, the difficulty of editing this step may come even greater.

To this end, DJI in the DJI OSMO Pocket Camera of the special supporting app DJI Mimo, added a wealth of late functions. In addition to the rich editing options, DJI MIMO also has a feature called "story mode", the user only needs to select the scene, and then follow the prompts to take extreme images, DJI Mimo will automatically clip and soundtrack, it is worth mentioning, "story Mode "also takes full advantage of the function of the mechanical platform, adding some motion rotation lenses to enrich the lens language.

Here's a video we took with us in "story mode" on the way to work. "

The first one we think must be bought is the platform control wave wheel. 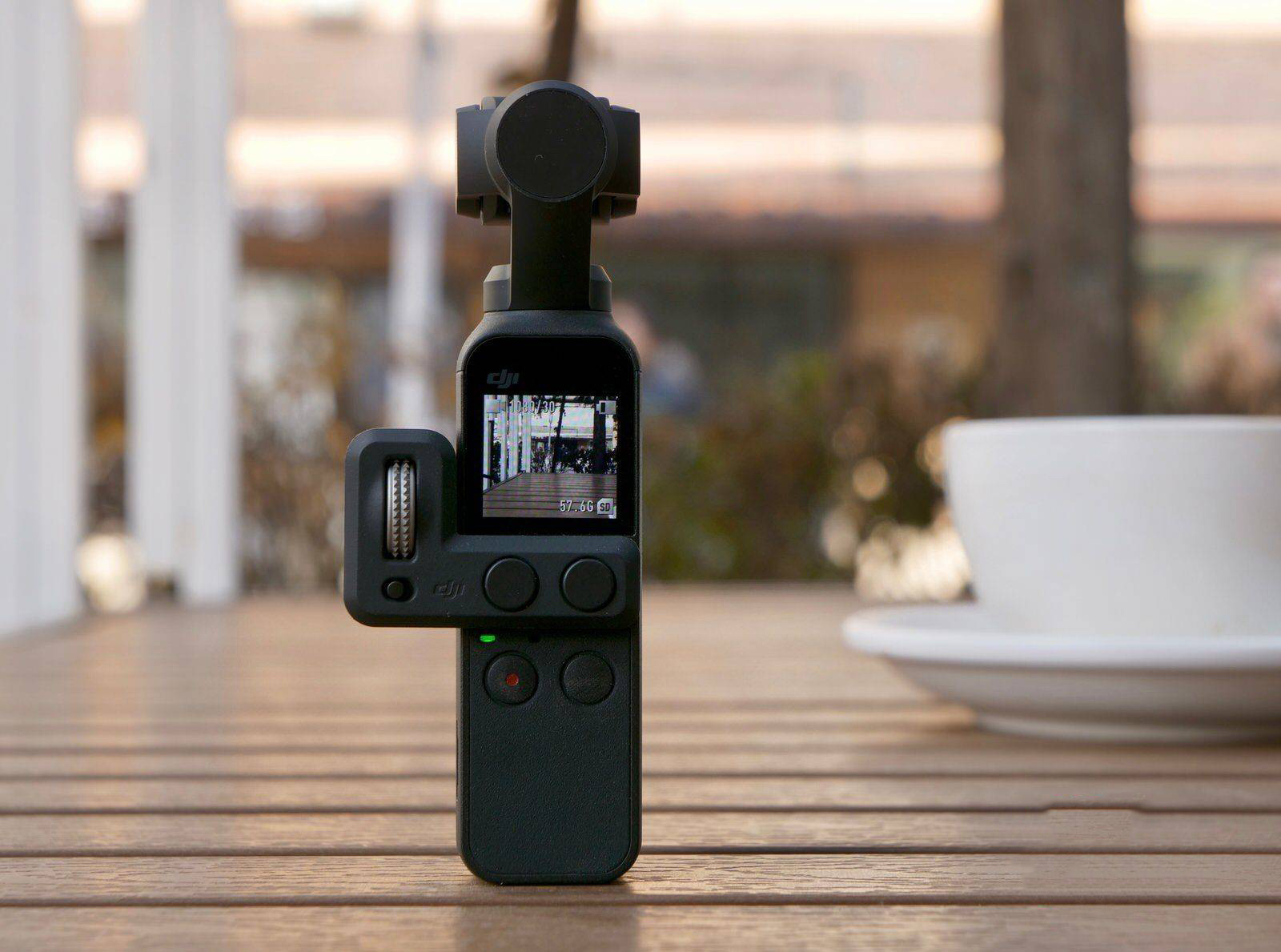 The gimbal control wheel is connected through a dedicated interface at the bottom of the screen, and the leftmost wave wheel is the control pitch angle, which is the function we mentioned above to swipe and exhale up and down at the edge of the screen, but this physical key has too much to handle than sliding on the edge of a small screen, and compared to sliding screens, the feel of the solid keys should be sensitive, and there is almost no delay in adjusting the pitch angle.

In addition, the expansion module also has two solid keys, the function is back and flip, the same frequency of use of two functions.

The second one we think is very worth buying is the wireless module. 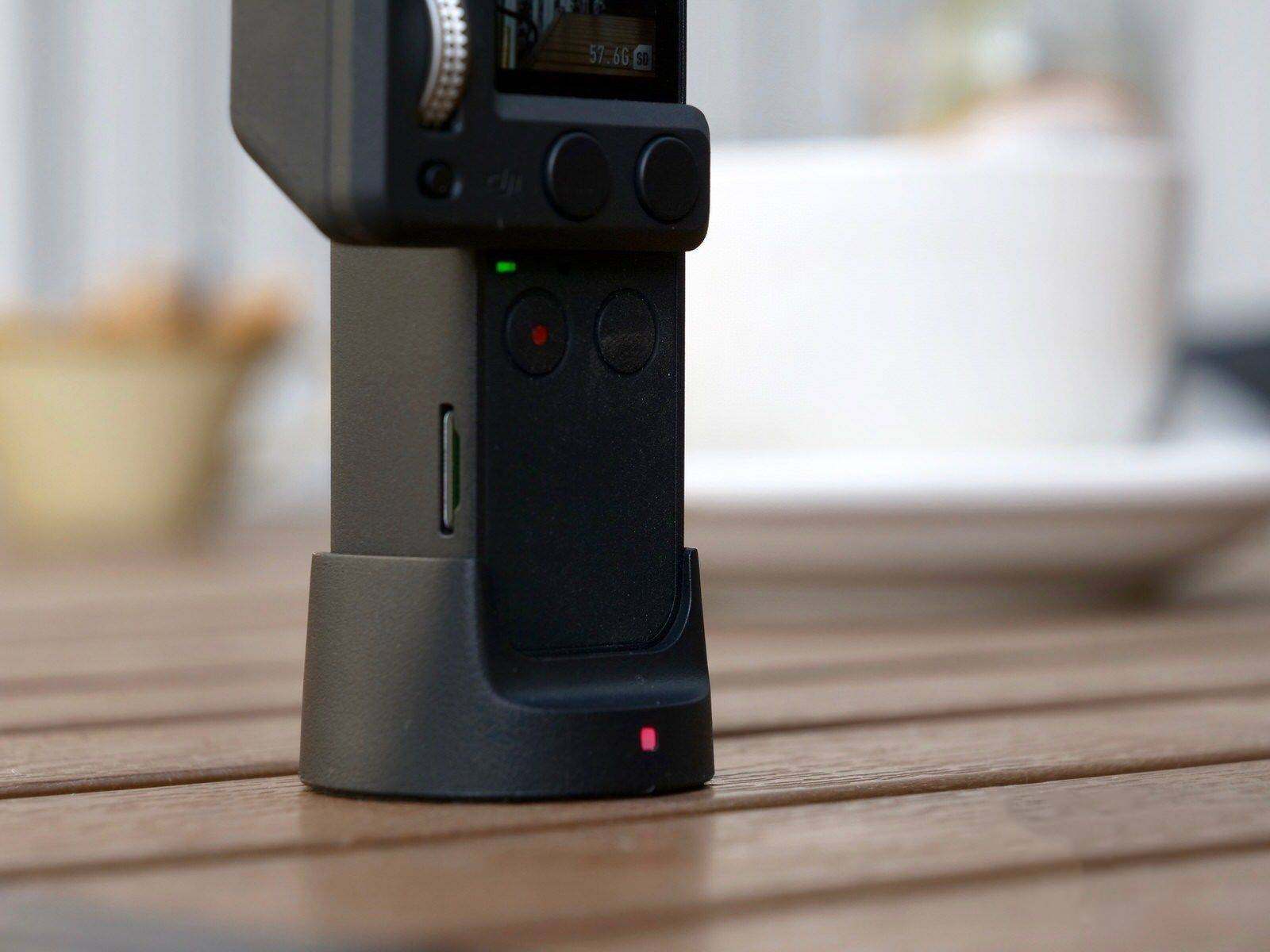 Because of the small size of the DJI OSMO Pocket Camera, there is no integrated wireless feature, and this module is required if you want to use Bluetooth or Wi-Fi features to transfer files and use your phone as a wireless monitor. 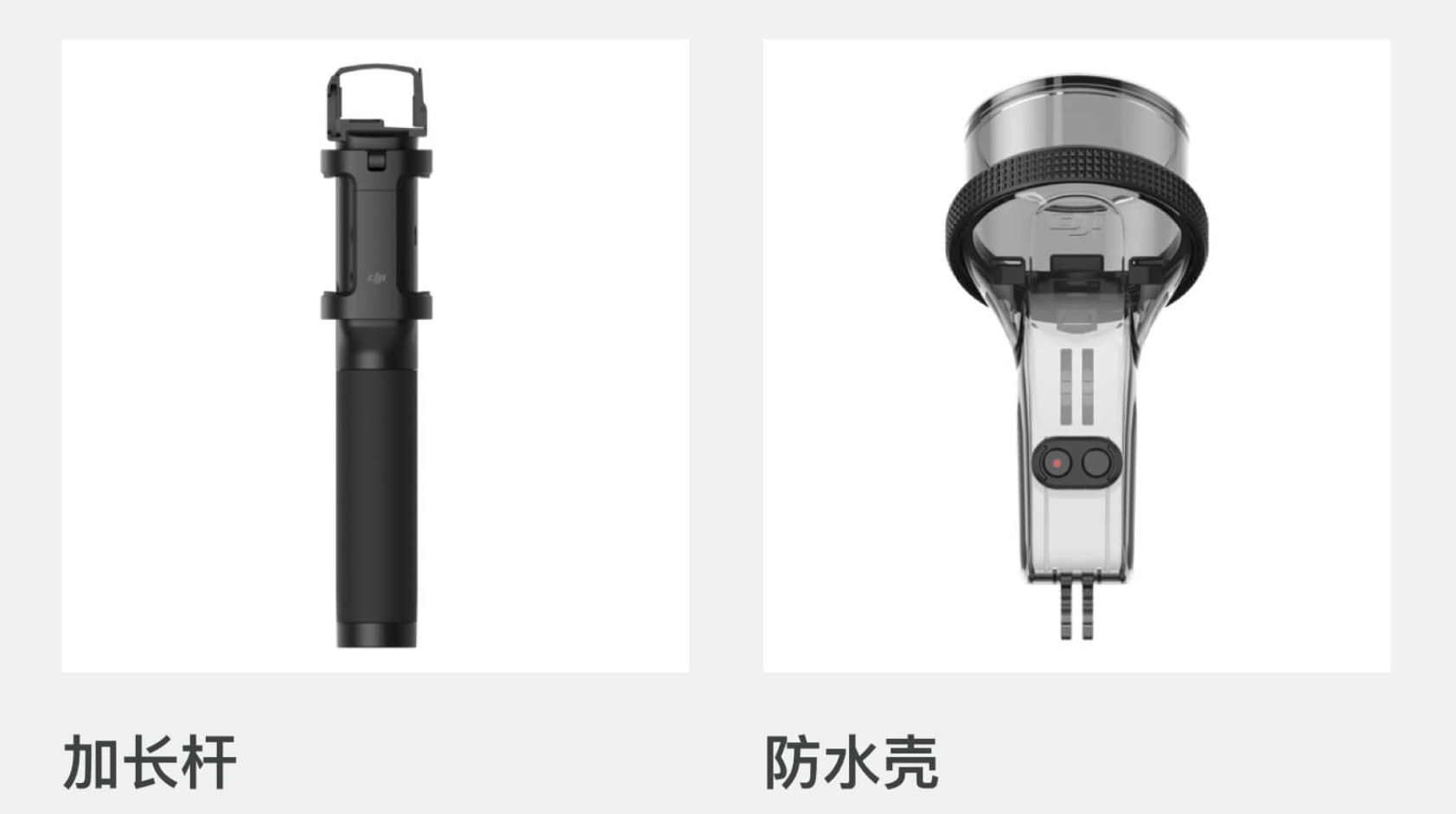 In addition to the above two, DJI also prepares a number of other accessories for the DJI OSMO Pocket Camera, including a dedicated mobile charging box, an extended rod with function keys and 1/4 threaded holes at the bottom, a waterproof shell with a maximum of 60 meters of waterproof depth, an expanded accessory adapter that can connect the DJI OSMO Pocket Camera to GoPro and other equipment accessories, The ND Mirror is adsorbed on the lens by magnetic force, the 3.5 mm adapter used to connect the microphone, and the universal interface to remove the base quickly. 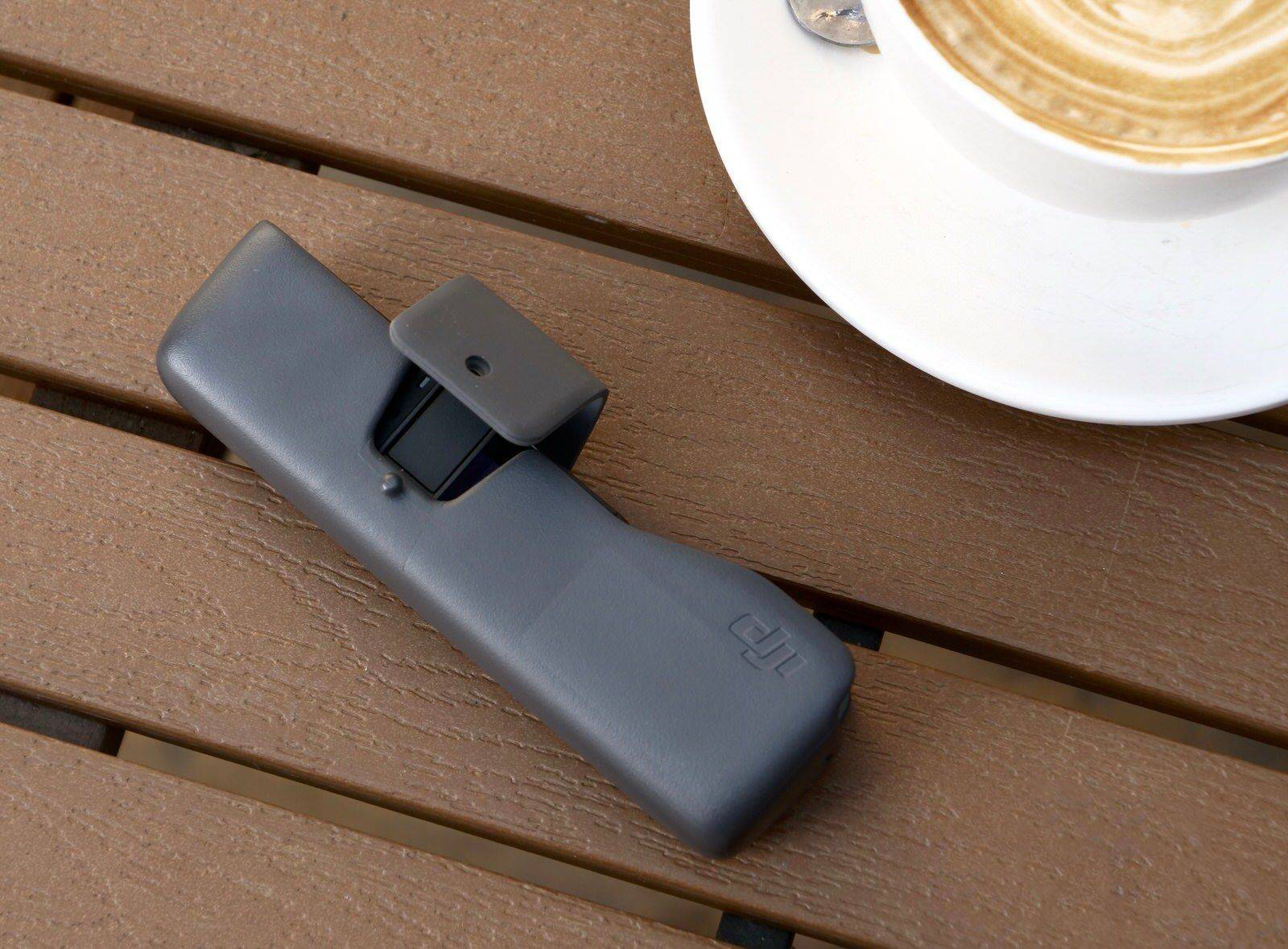 Outdoor sports, open FOV mode plus a few external accessories, the spirit of the eyes platform has become a good sports camera. With wireless control and the DJI Mimo app, the eyes platform can significantly reduce the threshold for video creation, allowing more non-professional users to make good videos as well. 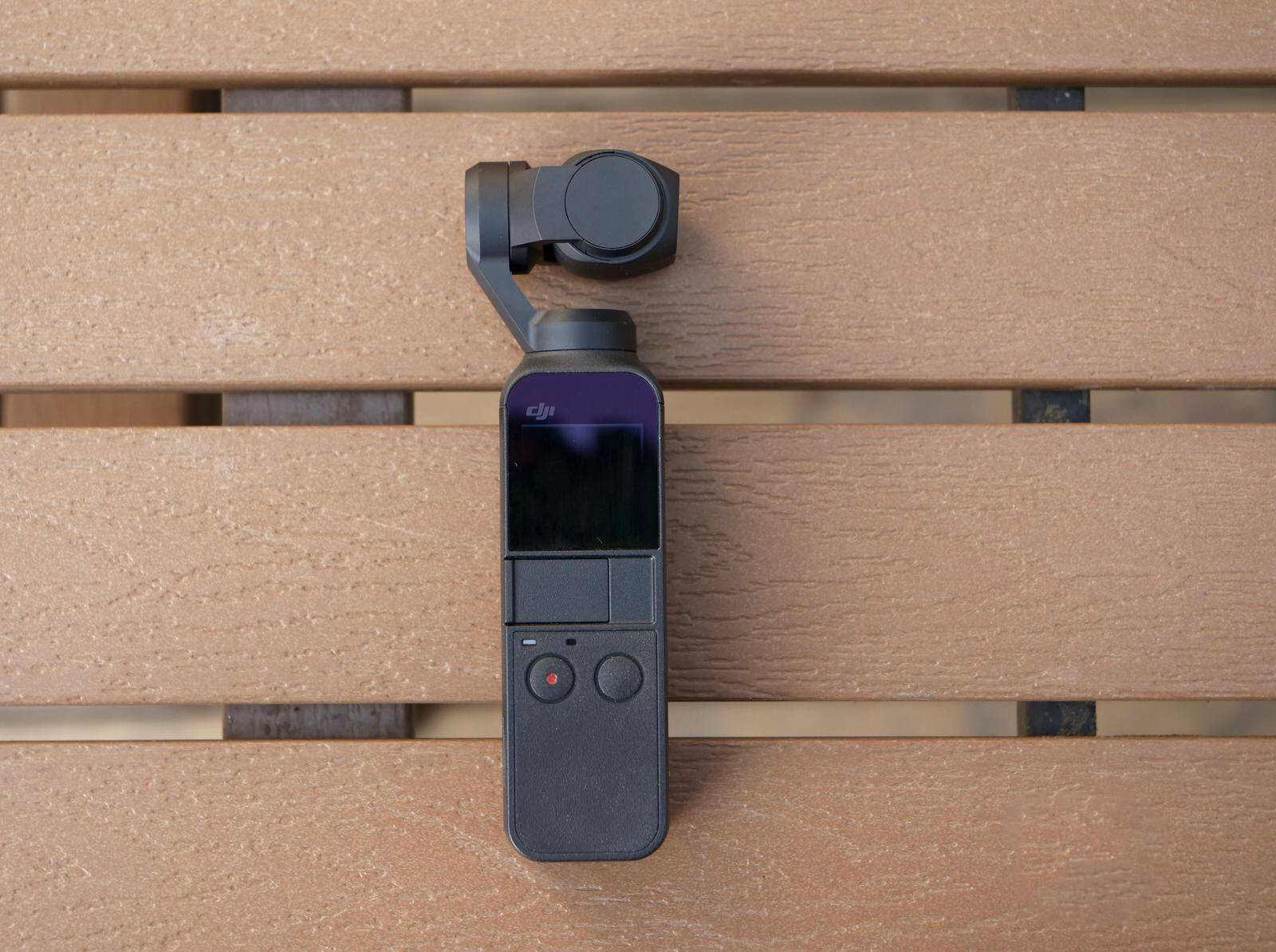 DJI eyes platform is priced at 2499 yuan, plus a few original accessories and Osmo Shield Insurance, a total of 3000 pieces up and down can be taken down.

This price can buy the introduction of a convertible lens camera and a set of headers, but the spirit of the eyes platform small size, excellent anti-shake, rich scalability is the camera and smartphone cannot match. If you are not satisfied with the equipment you already have on your hands and want to make the video quality of your shot go a step further, the eyes platform is a product worth considering investing in.